Pluto seems to have a lot of trouble finding and keeping food. At least that is what I have gleaned from his most recent shorts. Between the lengths he went to keep his bone to himself while sleepwalking and how he tries to get a bone in this short, T-Bone for Two, I worry that Mickey is not feeding him enough. 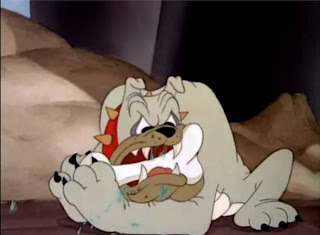 T-Bone for Two is a simple, straightforward Pluto short, and is entertaining enough. There’s nothing extraordinary about Pluto trying to steal a bone from a large bulldog. As we’ve said here before, in order for Pluto to be interesting, the animation has to convey emotion well, or he has to have some sort of outside voice, like the angel or devil on his shoulder.

Here, the animation is the key. It’s very fluid, lifelike and fun. The first part of this short, when Pluto is sneaking around the junkyard, trying to find a way to the bone, seemed very much like a Looney Tunes cartoon to me. It was just…different than what I expected from a Disney short. Even the music was a little different than the typical Pluto short. Pluto’s motions of sticking to the ground and creeping around and through obstacles was quite funny, especially when he’s scared off by the bulldog and goes through all of this in reverse. 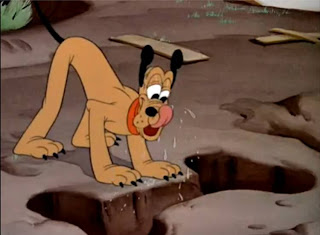 This short shows a little more clever side of Pluto, which is interesting. In the past he’s always been portrayed as somewhat of a dimwit, even when things work out for him. Here, Pluto is the smart one, trying to outsmart the bulldog and get the bone for himself. His first ploy is pretty smart, I have to say. Pluto marches off like he’s following a treasure map, then digs a giant hole in the shape of a bone. 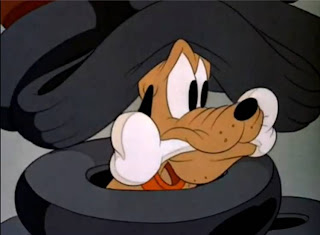 The bulldog falls for it, and Pluto manages to grab the bone and escape, at least temporarily. It’s pretty amusing, seeing the big dog throw his bone aside then come to the realization that he’s been had. Pluto’s run to hide is pretty funny, as is his interaction in the junkyard with a horn. 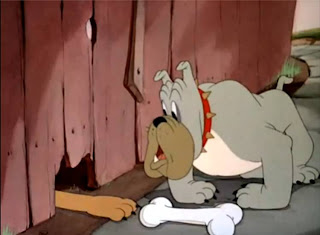 As he sits down to chew on the bone, Pluto sits on a horn, and when he gets up, the resulting in rush of air sucks the bone inside. It’s a funny joke, but it goes on a little too long. Pluto keeps getting the bone stuck inside, and rather than grabbing it and running away from the horn, he keeps getting stuck. It sort of contradicts how smart he was earlier in the short. 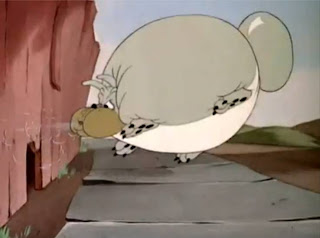 Even the finale of the short shows Pluto’s newly obtained smarts. When the bulldog locates him, Pluto looks like he’s in big trouble, but instead, he uses the horn to fasten around the bulldog’s nose. Then, jumping up and down on the horn, he blows the bulldog up like a balloon and sends him flying off into the ether. It’s a funny bit, but not super original. Kind of sums up the whole short – it’s funny and a nice diversion, but not one of Disney’s more memorable shorts.

All images copyright Disney. All rights reserved.
Posted by Ryan at 2:35 PM