Goofy as an athlete is a funny enough premise. When you add on top of that the chance to cast the Goof as an Olympic caliber athlete, well, that’s comedy gold. The Olympic Champ follows that mold, fitting neatly into the “How To” series as another great Goofy cartoon. 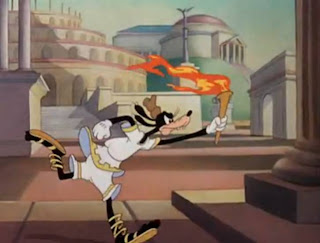 This time, we get a brief history of the Olympics, starting with the Torchbearer. There’s a great gimmick at the beginning of each event, where a title card is shown with a Greek look and feel to it, showing a well chiseled athlete doing that event. The scene then cuts to Goofy in that same pose, offering a fantastic comedic juxtaposition. 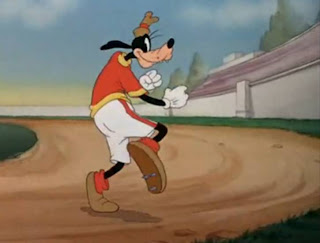 After Goofy carries the torch into a stadium full of equipment, the games are ready to begin. This short follows the classic “How To” formula, of the narrator carrying on about the proper way to do things, while Goofy demonstrates quite the opposite. With the Olympic events, though, it’s quite amusing, because Goofy really gets a chance to let loose with the free swinging limbs and contortions he is best at doing. 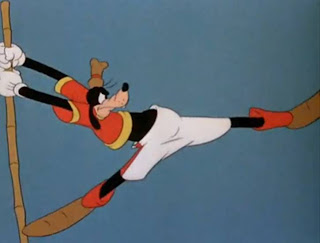 A great example of this is the demonstration of running track. We get to see the actions of Goofy running, leaned all the way forward with legs churning, followed shortly thereafter by a longer jog, and finished with a walk that turns into a little dance. Each of these uses Goofy’s long limbs and thin body to great comedic effect. 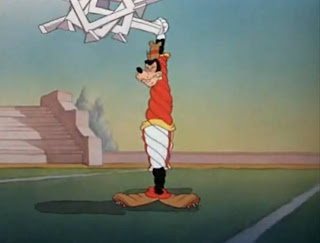 My favorite bit in this short, though, is Goofy’s attempt at doing the hurdles. Goofy gets a great running start and makes it easily over the first hurdle, but then collapses and starts getting slammed into hurdle after hurdle, never letting them slow him down. It just seems like a great metaphor for life – you’ll face a bunch of hurdles, but if you can’t go over them, just plow on through them.

There are some great gags in this short, like the oil derrick that results from when Goofy uses the hammer throw. Yes, an oil derrick. No, I’m not going to explain it, you just have to see it. It’s hilarious. 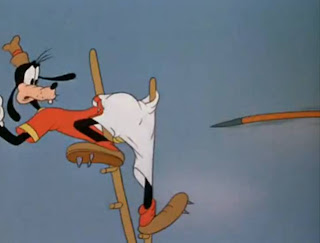 Watching this short was a nice respite from the wartime shorts and the educational efforts that I have been in recently. It was nice to have a pure comedy short, and especially one that was so very well done.