Back to war with Donald Duck today, as his adventures in the Armed Forces continue in Sky Trooper. This series is very entertaining, after the travails of Donald Gets Drafted and The Vanishing Private. This short picks up on a thread from Donald Gets Drafted, in that Donald wants to be in planes, not peeling potatoes and marching on the ground. 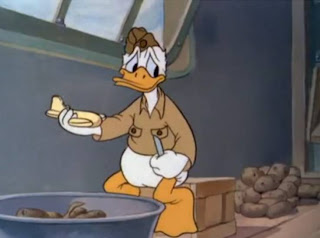 Again, I have to say that using Pete as the sergeant is an inspired touch. Since he had not been featured as the main antagonist for Donald before, his interaction with Pete feels fresh and original. In a way, he sort of plays as a Mickey character from Mickey’s earlier days, but coming off a little more mischievous. 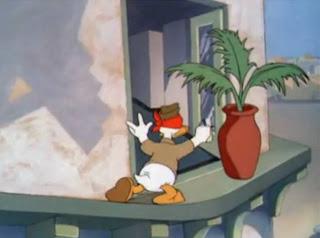 The story here picks up with Donald peeling potatoes, as he did at the end of Donald Gets Drafted, but this has still not crushed Donald’s dream of flying. He carves a potato into a plane that ends up getting him in trouble with Pete. The Sarge decides to put the kid through his paces, having him touch his fingers together with his eyes closed, and pinning the tail on the airplane, blindfolded of course. 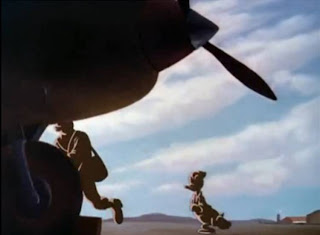 After this last trick ends badly, Pete decides to get his revenge and sends Donald up in the plane with the parachute troopers. There’s a nice humorous effect on this part of the short. As the scene shifts over to the men entering the plane, the animation goes to a propaganda style outline, with Donald trailing the muscular men. It’s hysterical. 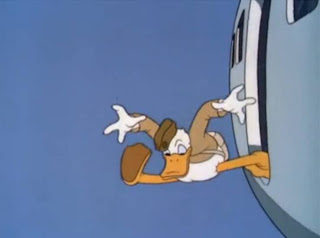 Even better, though, are the scenes of Donald desperately trying to cling to the plane, and by extension, Pete, as he falls out with his chute. Donald pulls Pete’s leg, rides below the plane in Pete’s pants, and eventually ends up pulling the sergeant out with him. 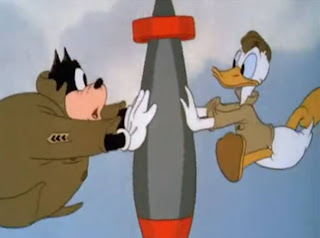 The two of them end up falling down with a bomb in between them, passing it back and forth. After an explosion, both Donald and Pete end up peeling potatoes. This series of shorts is so enjoyable, that I somewhat wish that there were more of them. Pete and Donald are good foils for each other, because Donald is just trying to help, but he also doesn’t take a lot of grief off of Pete. It’s a good combination.