Out of the Frying Pan Into the Firing Line

Back to war quickly today, to cover another one of the wartime shorts that I missed early in the year. This is one of the most effective ones I have seen, mixing the use of the Disney characters with a simple message to get the point across. 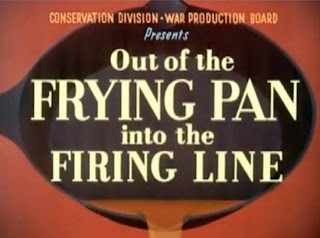 No real story here, except that Minnie is frying bacon and eggs in a skillet, then gets ready to throw it out. Pluto is all excited to get the bacon grease, until the radio comes on and informs both he and Minnie about the uses that the war effort could get from old grease. If you don’t have grandparents/parents who lived through the days of rationing or World War II, you should have them tell you about pouring used grease into tin cans and saving it. Believe it or not, that’s what they did, and then used the grease to make, well…everything!

That’s the message of the film, as it shows the grease dripping out of pans or pots, then turning into bombs, missiles and more. I will admit to being completely in the dark on how this whole process worked, but I know my grandmother talked about it all the time. 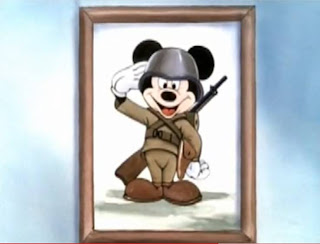 The short even goes into the process, showing Minnie pouring the grease into a can, storing it in the freezer, then allowing it to firm up. Once there’s enough, Pluto takes it to the butcher who’s collecting the cans. The butcher pays him in sausages, and the whole moral of the story is received. 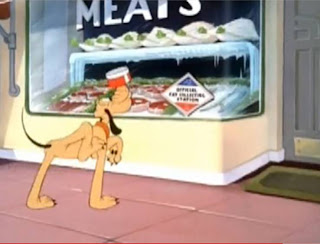 Out of the Frying Pan Into the Firing Line is not high art, but as propaganda explaining a process, it’s pretty good. We see the popular Disney characters teaching us how to make this work, and it seems to work well. What more could you ask for?