The last of the shorts for 1942 is Bellboy Donald, which is quite a departure for our favorite duck. After all, his recent adventures were mostly in the Armed Forces, while in his other shorts he’s been in a more rural setting, either as a gardener, blacksmith or just Uncle Donald fighting with his nephews. Here, Donald enters an urban environment for the first time in recent years, serving as a bellhop at a prestigious hotel. The short employs a technique we have not seen in a while, jumping right into the middle of a situation. Donald is being scolded by his boss for attacking the guests and losing his temper, which would surprise no one. 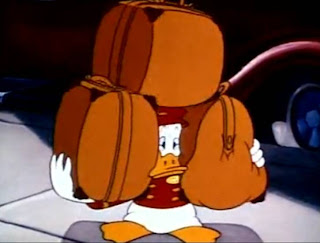 It’s a great way to shorten the exposition and get right to the point of the short, which is Donald’s interaction with the guests. It plays off of the audience’s familiarity with Donald’s temper and character traits, but doesn’t shortchange the current film. 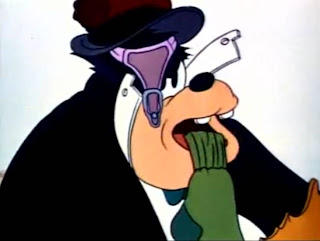 This short, like the Armed Forces shorts, casts Pete as Donald’s rival, although in this case it’s a new character, Pete’s son, that does most of the harm. Donald is, of course, attempting to control his temper, but doesn’t account for the horror that Pete’s little one tries to inflict upon him. 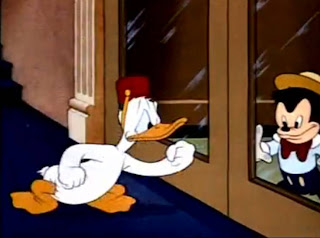 The situations are mostly as you would figure – Donald tries to lift the luggage but can’t, he messes up part of the luggage and gets reprimanded by Pete, and there’s a whole bunch of fun around the elevator. It’s not that these gags are more innovative or exciting than other things Disney has done. What’s unique is seeing Donald in this setting. 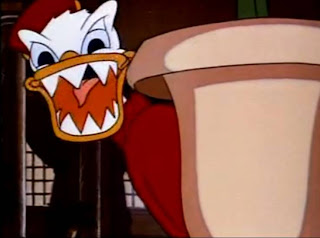 It was very reminiscent to what Mickey went through with Pete in the past. This time, though, there is the added element of the ticking time bomb you know is coming. Donald will not take this kind of treatment forever. When he eventually snaps, he asks his boss if he is fired, and then goes off on the kid, spanking him behind a well placed planter to hide the violence. I’m sure everyone in the audience cheered when he did.