The Disney Two-Fer - Tweetwatch at 7p, Innermouse at 8:30p

The battle for what we will Tweetwatch on September 28 is ongoing, but thanks to some heavy rallying by one @BufferflyBrie, it seems Tarzan has stormed back to take the lead over The Fox and the Hound. No love for Brother Bear, huh? 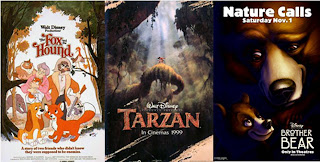 Remember, there’s still a day left to vote, and the winner will be announced on the blog tomorrow, so everyone has time to go and get the movie and be all ready to watch it on Tuesday night.

The real reason I’m writing this post, though, is to update the specifics of the Tweetwatch. As you might know from past efforts, we try to start by gathering everyone in the Friendfeed room, then I’ll give the cue to start the movie.

However, on Tuesday, 9/28, I’m going to be a little busy. You see, since we first started the Tweetwatches, some great Disney people started a little live vidcast called Innermouse. Innermouse takes place on Tuesday nights, and it’s scheduled at 8:30 p.m.

So, here’s my proposal to you, why not do a Disney Two Fer? The TweetWatch will take place at 7p.m., so everyone can enjoy the movie. Then, at 8:30, go watch Innermouse, play around with Scott, John and JL on September 28. I’ll be in the chat room, too, so you can come straight over from the Tweetwatch.

Vote for the movie you want to watch, then spend Tuesday, September 28 with your Disney friends! And while you’re at it, go watch the old Innermouse episodes and join in the fun!