Pluto At the Zoo

Pluto at the zoo is not a complex premise for a short. However, since it is different from previous versions of Pluto cartoons, it’s pretty darn entertaining. Getting to see Pluto outside his normal habitat of Mickey’s backyard displays some fun and inventive ways of our favorite dog playing off other characters. 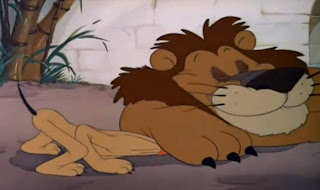 The one thing that is repetitive is Pluto’s constant fixation on bones these days. In many shorts from Sleepwalker to T-Bone for Two, the latest Pluto shorts are all about Pluto’s fixation on getting a bone to chew on. In past shorts, he fought rival dogs, be they female or bulldog or otherwise. Now, Pluto expands his horizons to different animals. 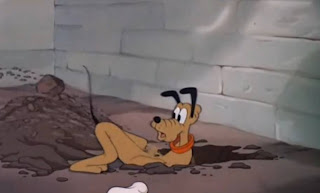 When passing the zoo, Pluto sees a lion with a giant bone, immediately sparking his interest. Pluto sneaks into the zoo and attempts to steal the bone, but finds himself intertwined with the sleeping lion instead. He eventually manages to get loose, but not before going through some quite funny contortions. 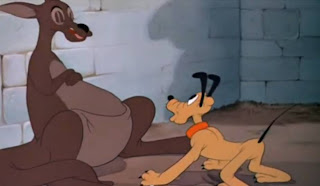 What follows is a procession of funny bits where Pluto proceeds from one animal pen to the next, trying to get his bone and get away. The first one is a kangaroo, which offered some great comedic opportunity. Pluto plays around with the joey in the kangaroo’s pouch, ends up in the pouch himself and then runs away. 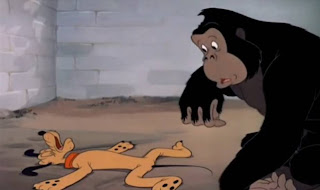 Following the kangaroo was a gorilla, which was my favorite part. Pluto faints dead away, and the gorilla thinks he has a new toy. It was quite amusing watching the gorilla play with Pluto, plucking his lip like a guitar string, then winding up the sleeping dog and letting him run. 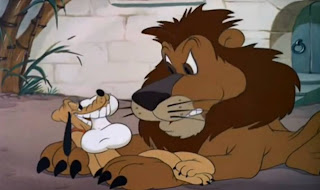 The frantic final scenes are quite amusing as well, as Pluto goes through a variety of animals trying to escape from some alligators. Pluto’s dash through the zoo is hilarious and a fitting end to this short. I thoroughly enjoyed watching Pluto put through his paces in this short.