The Alice Hunting In Africa Quandary 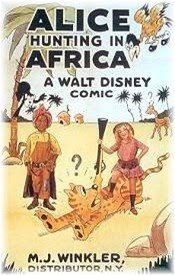 Image courtesy of Disneyshorts.org
Okay, so, time for a confession. When I began this project, I came to grips with the fact that some of the older films were no longer available. Several of the Alice Comedies no longer exist in any form I could get my hands on, and possibly even some of the Oswald films. I figured this would be a minor inconvenience.

Well, as of today, it has proved to be quite the pickle. You see, I finished the book, Walt In Wonderland today, and learned something I did not know already. When Walt signed his deal with Margaret Winkler for the first series of Alice films, he submitted Alice’s Day At Sea as the first film. This was not quite satisfactory for Winkler, who demanded more gags and less story to make the film more marketable.

Understanding her demands, Walt went back to work on a second film, Alice Hunting In Africa. The results were not much better, as Winkler refused to distribute the film, saying that exhibitors would not take it, it was so bad. So, Alice Hunting In Africa was actually completed before Alice’s Spooky Adventure. Unfortunately, I do not have a copy of this film.

Now, this brings up my question. I can order a copy of Alice Hunting In Africa, but the blog would be on hold until I get it in the mail, which will probably come in a few weeks. However, there is more to the story.

Later in 1924, Winkler consented to distributing Alice Hunting In Africa, so it was released to theatres in November of that year. So, if I follow according to release dates, I would have time to get the film before doing the blog post on it. You see my conundrum here? Do I stick with the chronological order of when the films were animated, or do I worry about when they were released in theatres?

This problem will come up again later, as when Mickey Mouse comes into the picture, Plane Crazy and Gallopin’ Gaucho were completed before Steamboat Willie, but the latter is the first film the public saw with Mickey in it. It would make sense for Steamboat Willie to come first, but since the point of this project is to trace the development of the Disney films from start to finish, and the evolution of the artistry, you would want to do the other two first.

It’s a question I will ponder today and tomorrow and will come back to with my next post. So, tomorrow, we will either review the next film, Alice’s Wild West Show, or we will be filling time with some other learnings from Walt In Wonderland, as well as a look back at some of the things we have looked at so far. I know, I’m such a tease. Until tomorrow…c’est la vie.
Posted by Ryan at 10:38 PM