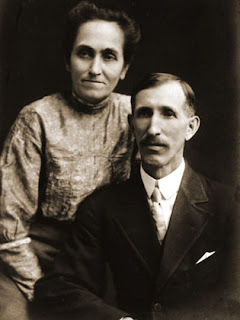 This week on the blog, we’ll be slowing things down a bit, as I’m waiting to get a few more films in before moving on. Instead of reviewing more Alice films this week, we’ll take a look back at the body of work we have examined so far, and look at information necessary for moving forward.

A good example of that is the relationship between Walt and his father, Elias. Again, this project is designed to illuminate things about Walt Disney, as much as it is to see what his craft evolved into during the films. Any Disney biographer will tell you that Walt’s relationship with his father is huge part of who he is, so it is worth spending some time discussing.

I am finishing up the book Walt Disney’s Missouri today, and this along with other sources, paints a wildly contradictory picture of Elias Disney. Some biographies show him as a cruel dictator of a man, who worked his sons to the bone, beat them when they misbehaved, and was quick to anger. Others show him as a typical man of the time, who believed that the family came first, and kept his boys in line with strict rules, but who ultimately loved his kids and tried to provide for them the best he could. My feeling is, as always, that the truth lies somewhere in between.

There is no doubt that Elias Disney believed strongly in discipline and kept his household running with precision. Whenever he entered a new business venture, which was frequently, he required the entire family to pitch in. However, he also never paid his children for their efforts, no matter how old they became. When Walt’s eldest brothers, Herbert and Raymond, rented a plot of land next to the Disney farm in Marceline, Elias insisted that they give him the money they made, since they were part of the family. It was this insistence that caused the two boys to run away to the West coast. A similar situation would play out later with Roy Disney.

Walt was the only one of the Disney boys who did not run away, though. The reason why may lie in a story that is told in several of the Disney biographies. When Roy ran away, he told Walt that Elias could no longer beat the younger boy. Sure enough, the next time Elias summoned Walt for a punishment, the future movie mogul caught his father’s hand and held it, until Elias wept, realizing he could no longer discipline his boy.

The big school of debate seems to be whether Walt’s life was a repudiation of his father’s or not. There is merit to both sides, but I believe the issue is more complicated than that.

In my own life, I can relate to this. My father was a hard worker, who worked for the government in the FCC for years, then would come home on weekends and always be doing something, either yardwork, working on cars or some other household project. He worked himself to death all the time, frequently getting massive headaches from workplace stress or colds from having worked his immune system down so low. I love my father, but I don’t want that kind of life myself. While he instilled a strong work ethic in me, I find ways to make life fun (this blog would be a good example), and don’t get me started on housework. I’ve always had non-traditional jobs (radio, theme parks, television) and I plan vacations frequently.

None of this is meant as a repudiation of my father’s life. I live only a few miles away from him. Instead, I saw the choices he made, the things he had to endure, and chose a different path. The way I see it, Walt made the same decision. His father was constantly chasing the good life, trying to find the next business that would put his family’s security in his own hands. He worked hard, seldom had time for play, and was a strict disciplinarian. Walt chose a different path, not because he disliked his father, but because he did not want those things for himself.

This is why I find the Kansas City period so interesting. Walt’s father was in town when he was making the Laugh-O-Gram fairy tales. Walt used his father’s garage to make Little Red Riding Hood. But at this point in his life, Walt was his own man, taking charge of his own destiny. Although this venture would fail, he would continue down the same path in Hollywood and would make it succeed.

To me, a large part of Walt’s perseverance came from Elias. He had seen Elias hop from business to business, doing menial labor and back breaking work. Walt decided that he would not do this, and instead found his outlet in creativity, and once he found what he loved, he never swayed from it. For this, we can all thank Elias Disney.
Posted by Ryan at 11:10 PM