The Four Musicians of Bremen

As we get started today, let me give great credit to a site that I just found last night, disneyshorts.org. It lists all of the shorts produced by Walt, and has write ups on each one. It’s an invaluable resource, and could really be a companion piece to the shorts reviewed on this blog.

The next film in the Laugh-O-Gram fairy tale series is The Four Musicians of Bremen, a cartoon loosely based on the story “The Bremen Town Musicians” by the Brothers Grimm. In that story, four animals, a donkey, a cat, a dog and a rooster decide to give up their former lives to become musicians, but along the way end up inhabiting the house of some criminals and scaring them off. A cute little story about being content with who you are, which is a moral that comes up in some of the later Disney films.

This is a much longer short, around seven minutes, and it is much more representative of what you may have seen from early Mickey cartoons. To start with, there are painted backgrounds in this short, as Walt was trying to save money by creating lush backgrounds that he could reuse. It works fine here, as many of the scenes take place over a generic landscape.

The short starts with a poem explaining that the four musicians try their best to play their music all around the countryside, but they’re not good at it, and when people’s nerves are frayed, they take it out on the four musicians. This fades into a scene of the four musicians, a donkey, a dog, a rooster and a cat being run out of town by a mob, throwing bricks at them. Strangely enough, one of the mob looks just like the old man in the picture from Little Red Riding Hood. That guy creeps me out.

Another thing to note is that this is the second time we have seen a cat like this. The cat is very much like the cat in Little Red Riding Hood, and he is the star of this short. The other four are mainly there for window dressing and to tie in the fairy tale plot.

As the musicians escape, they come to a body of water, and while the other three weep, the cat realizes that they are hungry. He urges his compatriots to play music, which drifts into the water and starts the fish and frogs dancing. One fish comes up to dance on the land, and the cat tries in vain to hit it with a 2’ x 4’, but he is, like so many of us, unfulfilled.

The cat chases the fish into the water, which leads to the most inventive scene of the short. The cat swims up after the fish, but runs into a swordfish that has removed it’s sword and is sharpening it. Right before the cat and the stray fish arrive, the swordfish tests out his new sword by cutting a fish in half ruthlessly. I’m serious! This is the most violent thing I’ve ever seen in a Disney short. The fish just casually turns around and cuts another fish in half. It’s like Pulp Fiction in the ocean or something. This is clearly not a swordfish to mess with. 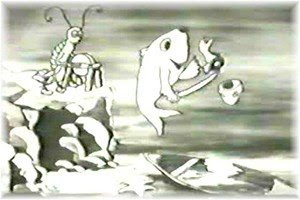 The swordfish catches wind of the cat and chases it out onto the land, picking up the three other musicians and chases them off a cliff. They fall one by one into the chimney of a house, and a band of criminals runs out of the house, scared off by the falling livestock. Which, come to think of it, is a good reason to be scared. I mean, if you were sitting in your living room, and donkey, a dog, a rooster and a cat fell down the chimney, I think you’d run, too.
So the criminals band together, get some weapons, and attack the house. The conflict is finally resolved when the cat hitches a ride on a cannonball, and detaches his tail to knock all the criminals out. The end title assures us that the musicians lived happily ever after. 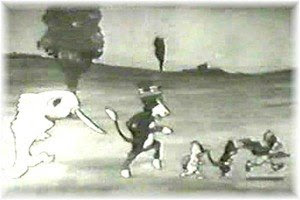 In day three of watching these shorts, this was the first one that felt like a Disney cartoon. Now, it feels very primitive still, but it had some inventive gags, a lush background, and a mischievous but fun main character. Sound familiar? The formula here is not that different from Mickey Mouse. I have not yet seen all the Oswald the Lucky Rabbit shorts or the Alice Comedies, but this reminds me a great deal of Mickey. 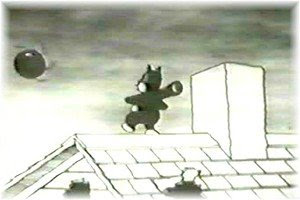 The animation on this was again done by Walt and Rudy Ising. There is still some great detail here. At one point when the cannonballs are assaulting the house, there is a close up of the roof, and there is detailed crosshatching on the underside of the roof. There’s no story or artistic reason that has to be there, but yet it is. Considering that these shorts were being done in Walt’s spare time, it’s amazing that he chose to put that much attention into these sorts of things.

Ultimately, this short does not tell the story of the Grimm fairy tale, but instead is an excuse for Walt to try out this cat character. The cat is loveable enough, but is very much in the trickster mode of things, pulling off capers against the other characters. We’ll see if there are more similarities as we continue. More Laugh-O-Gram Fairy Tales to come!