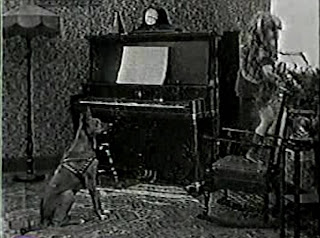 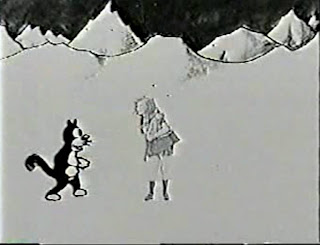 On this historic day, as I watched Barack Obama take the oath of office, I felt very privileged to be able to do what I do here, and have the time and luxury to watch these films and comment on them, with no fear of what will happen. Only in America could I actually take on such a project, because I have the freedom to write and the time that is afforded me from hard work. So, before moving forward, I wanted to acknowledge that.

Today, we move forward to Alice’s Fishy Story, an amusing short that continues to show Walt’s growing talents as a live action director. In fact, that is what is most striking about this short and Alice’s Wild West Show, is that there is much more live action to these shorts than animation. It seems to foretell the live action comedies that Walt would become known for in the 1950s and 1960s. This is one of the interesting things that I’ve noticed as I watch these films and move forward.

So, the story here is probably the most simple of the Alice films so far. Alice is playing piano, when Tubby and his gang show up and ask her to go fishing. Apparently the beating that Alice gave him in the previous short did not dissuade him. Is there a romance blooming between Tubby and Alice? Not really, but it is amusing how there is no continuity between the shorts, like you would find in cartoons today.

Alice manages to trick her mother by training the dog to play piano while she sneaks out the window. It’s a neat little bit of fun that again brings to mind later films from Walt. Alice and the gang hitchhike to the fishin’ hole, swamping a poor man’s car and hanging from all parts of it.

They get to the fishing location and start their leisurely afternoon with Tubby catching a small fish. Alice laughs it off and begins to tell her story, which is the cue for the animation to begin..

The animated portion of the short opens with Julius the cat, who has not yet been named as such, but we know that is what he will soon be called. He is ice skating in Eskimo territory, and finds out from a newsboy that the Eskimos are starving because the fish are not biting. After trying a couple of times to use his tail to catch some fish, Julius gets frustrated.

Alice, dressed in her spring shorts, saunters up to an Eskimo and also discovers the situation. Together, she and Julius devise a plan. They raid an abandoned freighter and dump something out of the ship into the water. The fish start biting it, then surfacing through a hole in the ice, and Julius uses his detached tail as a bat to knock them out and throw them in a pile. This solves the Eskimo food crisis, as the Eskimos grab the fish off the pile and eat heartily.

Back to the real world, and a cop catches up to Alice and the gang, chasing them away from the fishing hole as the short ends.

All told, this short is not quite as good as Alice’s Wild West Show, but it again shows the growth that Walt has made as a live action director. There were exceptional live action sequences in Alice’s Wonderland, the first of the Alice Comedies, but then subsequent entries showed very poor action, with Alice reduced to hitting her head to induce the animation sequences.

By contrast, the animated sequences tend to be much more inconsistent as time moves on. The animated sequences in Alice’s Wild West Show were very packed, and although simple, they still moved forward and told the story well. Alice’s Day at Sea featured amazing animation of the ship tossed at sea. However, this short features some inconsistent work, with a harder to follow story and poor photography with Alice. She is faint in this short while in the animated world, due to a cheap process used to place her in the animation.

While we know that eventually Walt would come to be the king of animation, there is little in the first of the Alice Comedies that show this. Instead, I have been struck by how good the live action sequences have become, and how they emulate what is to come. Perhaps when we get a little further along, I’ll write about some of the outside pressures that may have an influence on that.
Posted by Ryan at 2:14 PM