As mentioned previously, after the success of the Newman Laugh-O-Grams, Walt Disney signed a contract for six fairy tale cartoons. The first film Walt produced under this deal was Little Red Riding Hood, although it was not for release, according to the Legendary Laugh-O-Grams DVD. According to this version of the story, Walt animated it with friend Rudy Ising as an exercise to get ready for the task of completing these cartoons. However, other animation historians list the film with a release date of July 29, 1922, making it the first of the fairy tales to be released.

That alone is an evidence of the man’s attention to quality over quantity. Although the cartoon of Little Red Riding Hood is extremely simplistic, by the standards of 1922, it is good enough. But as you’ll see throughout his work, good enough was never the right thing for Walt. He made compromises here and there to get the product out, but it would be the extra work that Disney cartoons had in them that made his product so successful.

The beginning of Little Red Riding Hood is a bit surreal, as it offers no hint of what relation this animation has to the beloved fairy tale. In the early portion of the film, a mother is making donuts by throwing pastry into the air, while her cat shoots a hole through the pastry, and then landing the whole mess in a frying pan. This goes on for several seconds, but what makes it surreal is the old bearded man in the corner of the room that is leaning through in a picture frame. 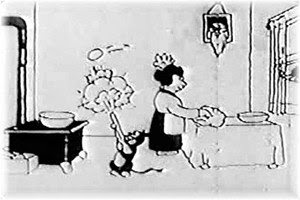 I’m not sure what that guy is doing there, if he is Red’s father or what, but frankly, it’s a little weird. We get a few quick shots of the old guy laughing, and it’s still weird. Is he a picture, or is it a window? I’m not sure, and I probably should not obsess about this sort of thing, but it’s just a very strange addition to an otherwise straightforward cartoon.

After a while, the cat eats one of the donuts, then dies, and his nine lives fly out of him as a counter in the bottom right of the screen keeps track. The mother gives the donuts to Little Red Riding Hood, presumably to take to Grandma. Red gets her car out of the garage bearing her name, and we see that it is powered by a dog that is being drawn forward with sausages dangled on a stick behind the car. A strange contraption, but hey, if it works, it probably saved Red a lot on gas.

She has a flat tire and blows up one of the donuts to fix it, which, based on the cat, is probably better than eating it. Then the “Wolf” shows up. The Wolf in this film is really a dirty old man, who shows up in a car headed the other way. He makes some overtures to Red, and then they part ways. The camera follows the Wolf instead of Red, and we see him get to Grandma’s house first. 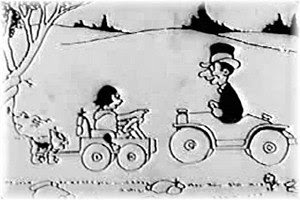 Grandma left a note that she has gone out to the movies, and the Wolf takes the opportunity to sneak inside. We all know this story, right? Red arrives and heads inside, and we see the house shake and cries of “Help!” emanating from the house. Red’s trusty dog runs away to seek help, and finds a conveniently located man with an airplane. Always nice to have one of those laying about. 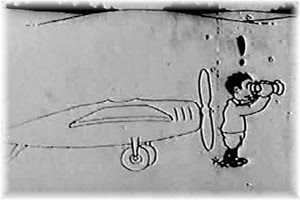 The dog loads up on the plane, and the man flies over the house with a dangling hook, that drags the house off the top of Red and the Wolf, and the Wolf scampers away in his car. Red gets the hook the second pass over and is pulled up into the plane, where she kisses her rescuer. As we fade out, two hearts dance into the screen and a caption reads “And they lived happily ever after???”

So, it’s a familiar story, although somewhat more realistic and gritty here. Some people who have watched it think the Wolf is raping Red, but I think the intent is probably more simplistic. Simply menacing her is probably the intent, but who knows. The idea of having the Wolf be a man, though, is a bit creepy, although not as creepy as the old man in the picture frame.

The artistry here is good, but not spectacular. Just from the look, it does seem as though Walt had a heavy hand in the production of this film. The look compared to the Laugh-O-Gram slides is very similar, with sparse backgrounds and clean lines.

The main thing you notice is the storytelling. Most cartoons in the 1920s were about a collection of gags more than anything else. This cartoon starts that way, with the donut gag, but from that point forward, it is more or less a linear story. There are some gags along the way, but it is interesting that Walt chose to move towards storytelling rather than out and out gags.

All in all, it’s an absurd and funny film, and I recommend you check it out. Next up is the Four Musicians of Bremen, another of the Laugh-O-Gram fairy tales.

Images courtesy of Disneyshorts.org
Posted by Ryan at 9:27 PM