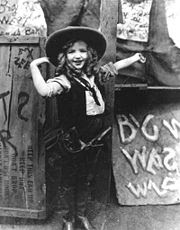 Well, after a little thought, I have decided to go ahead and move forward with viewing the films in the order they were released. However, I have also made a much larger decision about this project.

I’m doing this on a shoestring budget, mostly cobbling things together from what I already have or can readily afford. So, I don’t have the ability to go out and purchase several DVDs for one or two Alice shorts, or even some of the other shorts that may be missing. In some cases, there are shorts that are completely gone. Therefore, I’ve decided that I’ll move forward with what I have and can get fairly easily, then try to view some of these other shorts/films later. I will likely do a separate series of posts on those films as I get them.

Today, though, that leaves us with my favorite Alice short to date – Alice’s Wild West Show. This has to be considered one of the most interesting of the Alice shorts, because of what it shows about the young director, Walt Disney. The animation and the live action pieces are quite entertaining, which is more than can be said about Alice’s Spooky Adventure.

The short opens with Alice taking tickets for her Wild West Show. She is costumed in her finest Western wear, with hat, holsters and all. She is trading tickets for trinkets from the neighborhood boys, which is quite amusing. There is an elaborate stage set up behind her, and before long the “orchestra” tunes up to start the show. This actually is a bunch of boys banging on pots and pans and playing one string guitars, but it’s quite cute. If you know much about Walt, you know he was a performer, and you could imagine him staging this kind of production in his own backyard.

The show begins with Alice meeting up with some criminals in a cowboy bar, which has such amusing signs as “No shoting aloud” and “Neer Beer.” This is just another way Walt packed this film, as there are signs with clever puns and wordplay all around. Alice shoots the criminals and the curtain is pulled for the second act.

In the intermission, Tubby O’Brien and his gang of thugs come in and steal the front row. They’re a rough looking bunch, and Alice’s cohorts take off, scared to finish the show. So, Alice improvises and begins telling the crowd about her exploits in the Wild West. That’s where the animation begins.

The first animated sequence has Alice, on a stagecoach, being chased by Indians. They are firing arrows at her, but she manages to fend them off by tossing suitcases off the back of the stagecoach, then finally facing them down inside a cave, where we can’t see the action. This was a common trick in Walt’s cartoons, as he used it in nearly all the Laugh-O-Grams.

That short bit cuts back to the live action, where the gang is booing Alice, so she begins another story. Back to animation, where Alice is in a bar, and Wild Bill “Hiccup” is trying to steal the safe. Again, another gag packed in, as the safe reads “Mfg. by the Unsafe Safe Co.” Eventually, Wild Bill escapes with the safe, but Alice and our friend the dog from the Laugh-O-Gram days chase him down.

The gang boos again, back in the live action world, and begins throwing rotted vegetables at Alice. She gives as good as she gets though, chasing them away and tackling Tubby himself to give him a thrashing. The short ends with Alice chasing him away and turning to the camera to grin, as we see her two front teeth missing.

This short is very funny, and features Virginia Davis’ best performance as Alice yet. Instead of just standing around flapping her arms, she uses her killer smile and her eyes to express emotions and thoughts. Is this Walt the director bringing this out of her? It’s tough to say, but the tone of this live action piece brings to mind the later live action Disney films.

The animation here is not any better than the other films, but Alice’s interaction is great. She throws a suitcase off the back of the stagecoach and hits an Indian, she shoots at Wild Bill, and she shakes hands with the dog. All of this seems much smoother than in the earlier shorts.

The question here is whether the consistency will remain. After all, Alice’s Day at Sea was beautifully animated, but then Alice’s Spooky Adventure was nowhere near as well done. We’ll see tomorrow, when we look at Alice’s Fishy Story.
Posted by Ryan at 8:43 PM