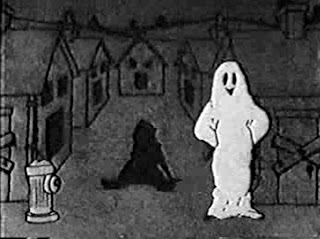 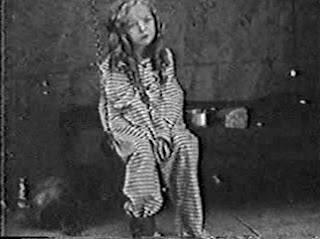 Back to the shorts tonight, with the second of the Hollywood shorts – Alice’s Spooky Adventure. As I’m reading through the book Walt In Wonderland, Merritt and Kaufman note that many times, Walt’s shorts go for gags over story, often failing to make a truly entertaining film. Through the Laugh-O-Grams and Alice’s Wonderland, I had not encountered this. Alice’s Spooky Adventure changes that. It’s not to say that this short is bad, but it’s definitely nowhere near as entertaining as the Laugh-O-Grams and not quite as good as the previous Alice films.

But enough of that, let’s talk about what happens. The basics of the story are that Alice and her friends hit a small ball into an abandoned house, but all the boys with her will not go in to get it. For some reason, all of Alice’s friends in these shorts are boys. Weird, I know. Anyway, Alice says she will get the ball and enters the house.

Once inside, she gets a little scared by a cat moving a box around and falls over into a sheet, the finally gets hit in the head by a collapsing roof. She dreams that she has entered a town of ghosts, which is when the animated sequence begins. As impressed as I was with the opening montage of Alice’s Day at Sea, this animation is just, well…unimpressive.

The animation features ghosts popping out of houses, which is interesting, but not great, and finally a ghost runs up to Alice and asks her to “Take it off!” This is quite the interesting proposal from a ghost to a little girl. Not sure if that was a bit of subversive humor from Disney, but it’s funny to a modern eye anyway. Alice finally pulls the sheet off the ghost and reveals a cat underneath. The cat, as I was reading in the book, would come to be known as Julius, but here is a seeming descendent of the one in the earlier shorts.

The cat and Alice manage to fend off all the ghosts, with the cat removing his tail to use as a bat, then passing it off to Alice in a neat little gag. After that, Julius professes his love to Alice, kissing her hand. She wakes up in the house, with the real cat licking her fingers. She picks up the ball and heads outside, running into a cop, who locks her up in jail. It’s a very Monty Python sort of ending, kind of running out of steam in the scene and just wrapping it up any way possible.

That’s the problem with this whole short, there’s just not much to it. There is no discernible story, and it falls right into the same formula that the first two Alice films did. Alice goes somewhere, falls asleep, dreams something silly, then wakes up. It’s just not a good movie. The animation is crude and there’s just not the same fun that is present in the other films. I will have to see more of the Alice films, but as of now, I can see why Walt progressed to things like Oswald and Mickey. There’s just not enough in the interaction between Alice and Julius to make a compelling cartoon.
Posted by Ryan at 10:50 PM