I Read Books, Too 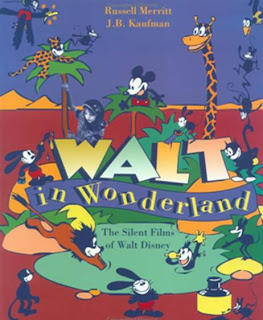 As I progress through this project, I am also trying to read as much as I can about Walt and his movie making process and the views of others as it relates to the films I am watching. To that end, today, as I am waiting to receive the DVD with the next Alice short, Alice’s Spooky Adventure, I’ll be discussing the book Walt In Wonderland, by Russell Merritt and J.B. Kaufman.

Up front, I want to say that I have not finished this book. In fact, I’m only beginning it again, after I started last summer and was not able to sit down and take it in properly. However, I have to say that it is an invaluable resource.

Earlier today, I was swapping e-mails with Patrick from Disneyshorts.org about this blogging stuff, and trying to figure out what people want to read, since I’m not an animation historian. I don’t know a lot about “squash and stretch” animation or the way backgrounds are rendered, etc. I just don’t. And that’s not really my purpose on this blog anyway. The point is to just get a visceral reaction to the work, talk about what stands out, and join you guys in a conversation about the films.

However, if you are an animation buff, and perhaps even if you aren’t, Walt In Wonderland is the book for you. Merritt and Kaufman are noted for their intense scrutiny on the silent films of Walt Disney, which is documented in this book. There are two parts to the book – the first is an examination of the films from a critical perspective, and the second is a story of how the films came to be. Both are proving to be quite good, although a bit scholarly.

One thing that particularly struck me early on in the book was the following: “The story of Disney’s silent film career is not so much a struggle for artistic expression as it is a fight for commercial stability.” I had never thought of it that way, but that is so true. From the Laugh-O-Gram films to the Alice Comedies to Oswald, Walt was never secure. The question inherently posed by that statement is whether Walt was pursuing similar artistic devices (the recurring cat, the similar plots of the Alice shorts) to save time and money to survive, or was he simply losing interest in the subjects and looking to move on to other things? That question is not answered, but it is something I’ll be pondering as we move forward.

Regardless, I’m still working through the book, and I hope to finish it next week, but if you are very interested in the silent films, I recommend you pick it up. I got my copy off of Amazon for next to nothing, so it’s a good bargain as well. Be aware, though, that it helps to watch the shorts first. The first time I tried to read it, in preparation for doing the blog, I couldn’t get through it, because I had not seen most of the shorts. Now that I have seen some of them, I understand it much better.

All in all, it’s a great companion piece to this blog. I plan to finish reading it and then move on to another book that documents this period, called Walt Disney’s Missouri. I have read that one before, but after viewing the films that came out of that period, I want to read it again.