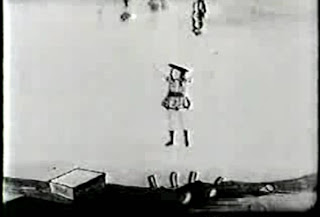 Today’s entry in the blog marks a turn in direction for Walt, as we are reviewing the first short that was entirely produced in Los Angeles, as part of the new Disney Brothers Studio. How did we get here? Well, that is the complicated part.

See, when Laugh-O-Grams finally went under, Walt had to find something new to do. With one suitcase, his camera, and $40 in his pocket, he hopped a train to Hollywood, where movies were made. By his reasoning, if he could establish himself as a director or animator there, then he could continue making his movies.

He hooked up with his brother Roy, asking him to take over the business operations, while Walt would focus on the creative side of the business. This simple act is probably what enabled us to have the Disney magic we have today. Without Roy managing expenses to make things work, Walt would never have had the business acumen to keep going. You can read the whole story in Bob Thomas’ wonderful book Building A Company, but suffice to say that Roy Disney is every bit as important to the Disney legend as Walt.

After trying his hand at being an extra on a movie and being rejected as a director, Walt began shopping around his reel of Alice’s Wonderland. He wrote a letter to M.J. Winkler, describing the studio he had established to produce the Alice films. In fact, his studio was the garage of his Uncle Robert’s house, but Walt’s salesmanship won Winkler over.

Alice’s Day At Sea was the first of the Alice series that was completed on the West coast, and it was done almost entirely by Walt. He directed it, filmed much of it, and animated the vast majority all by himself, with assistance from Roy. As such, it is probably the truest sense of how Walt’s art has evolved from the Newman films to Little Red Riding Hood to this film. In the span of two years, how much has changed?

The answer is a great deal has changed. This short opens with an extended live action sequence, featuring Alice and her dog getting ready for a trip to the beach. The live action sequence here is extremely inventive, especially where the dog is concerned.

The film shows the dog being awakened by an alarm clock, and when the alarm won’t stop ringing, the dog chews it up and drops it in the trash can. He wakes up Alice, who motions to him, and the dog runs off camera, returning moments later driving a small Model T. It’s a very cute gag, and reminds you of things you might see Pluto doing in a Mickey cartoon.

Alice and the dog are seen driving down the palm tree lined streets of Los Angeles, which in itself is a cute scene. They arrive at the beach and soon meet a sailor who tells them a story about a giant octopus menacing a sailing ship. The sailor leaves and Alice and the dog go sit in a nearby dinghy, soon falling asleep. See, that alarm should have let the dog sleep.

I’m sure you see where this is going. To paraphrase Ellen DeGeneres from EPCOT, when someone falls asleep in a cartoon, they’re going to have a what? Yep, a dream sequence.

This is where the animation begins, and the first shots are stunning for 1924 standards. If it is entirely true that Walt did this all by himself, then he truly pulled something off. The deep black waves are buffeting a sail boat, with thunder and lightning raining down. It’s a dynamic, realistic scene that puts to shame anything that was seen in the Laugh-O-Gram Films.

That soon ends, though, as the ship hits the bottom of the sea, and Alice has adventures there with a fish band, dancing and singing, she sees our friend the cat in the form of a fish, and even King Neptune’s Zoo. Soon, though, as in Alice’s Wonderland, she is menaced by something that wants to eat her. It’s remarkable how similar the plot is of this film to Alice’s Wonderland, now that I think about it. Alice visits a new place, sees or hears some things about it, then has a dream that puts her in an animated world where she plays, then nearly gets eaten. Weird.

Anyway, a giant fish ends up eating her temporarily, but she escapes the fish only to be caught by a giant squid. It’s at this point that she wakes up and realizes that she’s tangled up in a fishing net, and she is disentangled by the sailor and his friend, who have just returned to the beach.

That’s the basics of the film, such as it is. I have to say, that after going through the Laugh-O-Grams, this film did not hold my attention like Cinderella or Puss in Boots did. It is definitely a slight improvement over Alice’s Wonderland. I’m probably eager to get on with things and get to Oswald and Mickey, to see some shorts that I recognize and things I have never seen before.

I am beginning, though, to gain a much better appreciation for the artistry of Walt Disney. The animation sequence at the beginning where the boat is being tossed on the waves is very striking, and the live action direction is very good as well. Virginia Davis as Alice is good, but I think the real attraction to the short is the dog’s acting and the animation. Alice is merely a sideshow here.

As I move through this project, though, it’s interesting to note recurring themes, like the cat, the similar plot devices in these last two Alice films, the band with dancing that seems to show up in the majority of the Laugh-O-Grams and the Alice Comedies, and a few others I can’t think of at the moment. Perhaps in a day or so, after I’ve viewed a few more of the Alice films, I’ll write a post about that. For now, see you tomorrow!
Posted by Ryan at 9:49 PM