Okay, now that I have that out of the way, I can talk about The Band Concert, another big milestone in Mickey’s career. It’s his first color short, and most people believe, his finest short in a long career.

Why is this so good? In my opinion, it’s because we have the entire cast of Mickey’s friends used in a great fashion, with their own distinct personalities, and playing off of each other well. It’s a short where you stop worrying about the animation or the colors and focus entirely on the characters.

The short is a Mickey Mouse cartoon, but Donald Duck steals the show. Donald appears shortly after the band begins playing and takes out a flute to start playing “Turkey in the Straw,” in contrast to the band that is playing the William Tell Overture. Despite Mickey breaking his flute, Donald whips out another one, then another and another. His magical appearance of flutes is one of the funniest bits ever in a Disney short. 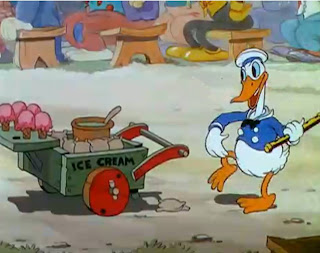 But there’s so much more than just Donald. The interruption of a bumblebee causes some great action, with Donald launching ice cream at the bee and the ice cream ending up running down Mickey’s back. His shimmy, accompanied by appropriate belly dance music, is laugh out loud funny. 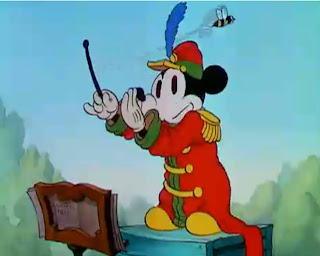 We also get a glimpse of other favorite characters, like Goofy and Clarabelle. I mentioned before that I did not remember the two of them being so “friendly” when I saw them as romantic partners in the movie, The Three Musketeers. But here, they are just that, as you see them flirting and glancing at each other over their instruments. 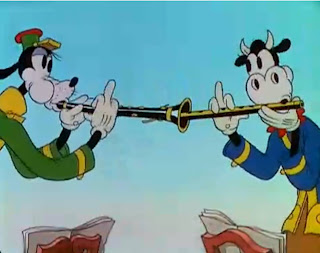 The big finish is the tornado sequence, which is simply stunning, from a comedic and artistic standpoint. Mickey and his band are lifted into the air by a tornado, but they never stop playing. Mickey slides through windows and doors, the band is flung up and down and in circles, but the music keeps going. 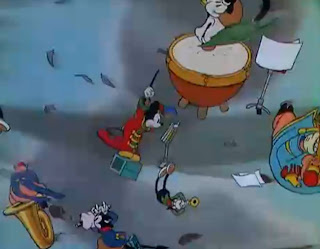 When they finally collapse into a tree, it’s not the one big crash and rubble scene we have seen in other Mickeys. No, this time, the animators take time to single out each character, showing them landing in a tree and continuing to play. Then, when the camera pulls wide to show the chaos in the tree, it’s a much more resonant shot. Great work. 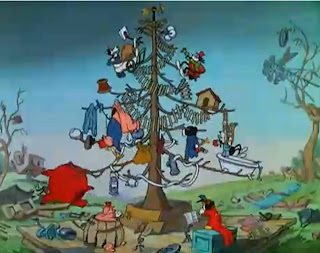 I’d be remiss if I didn’t comment on Mickey’s color, since this is the first time we have seen it. The sight of Mickey outside his normal red pants and yellow shoes is odd for someone who has grown up with that. That said, this is a classic look for Mickey, with the white face (as opposed to the flesh color he has now) and black everywhere else. His eyes are not as defined as they would later be, but he is instantly recognizable. 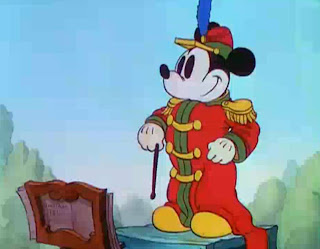 I’ve read tons of articles and books that call this the best Mickey short of all time, and I can’t disagree with that. Other shorts have favorite moments of mine (Lonesome Ghosts comes to mind), but none are so consistent and wonderful as The Band Concert.