I talked yesterday about Music Land, and how it was a strong story that played off of and integrated the music. That is not what Three Orphan Kittens is, but it still is a great example of how the Silly Symphonies series can work. And it features some top shelf animation that show the Disney crew honing their craft as well.

Three Orphan Kittens is much more like the “cute” shorts that we have seen, such as Water Babies or Funny Little Bunnies. It features, oddly enough, three orphan kittens, who are stuck in the snow, but find a way into a house, where they find warmth and a table being set for dinner. 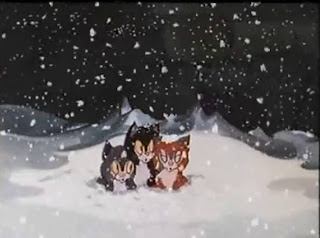 Of course, the kittens proceed to wreck everything. The dinner table sequence is not particularly memorable, because it doesn’t feature great gags. There is good stuff there, but nothing that particularly stands out. It’s just cute, with kittens fighting with pies, getting stuck in a bottle and the like. 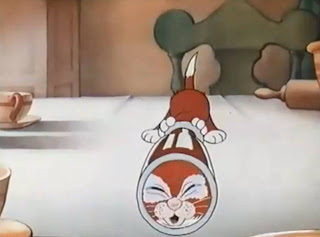 After the dinner table, the kittens head to a little girl’s room, where they get into a battle with the toys. Again, nothing really stands out, but it’s just cute little gags. The kittens duel with a baby doll and other toys, and one of them gets knocked into a nearby pillow, causing a feather to fly into the air. 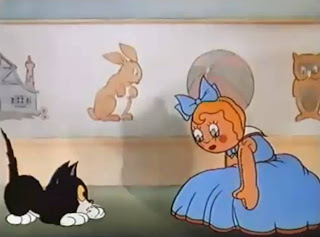 That is what starts the most interesting part of the short. The lead kitten chases the feather, and the movement of the camera follows him. I know that sounds like nothing special, but it is almost as though the rooms themselves are moving, because as the cat goes from room to room, there is no cut. It is what we’d call a tracking shot in cinema, but here it’s something new and different.

Then, the feather lands on a player piano, leading to the next great sequence. The cats try to get the feather as it bounces along the keys. The lead kitten, entranced, plays a tune on the piano that fits the mood of the scene. It’s a clever bit, as he plays a creeping song as he creeps up on the feather, then a crescendo as he crashes forward and the feather flies away. It’s very well done. 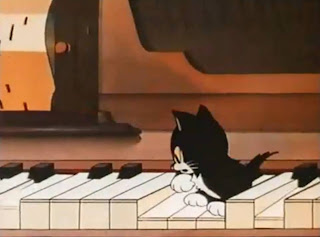 Ultimately, the damage the cats do catches the eye of the housekeeper, who is preparing to throw them out when the little girl sees them. Then, the cats get their comeuppance. The girl dresses them up like dolls and treats them like babies, forcing a bottle in the lead kitten’s mouth as the short closes. 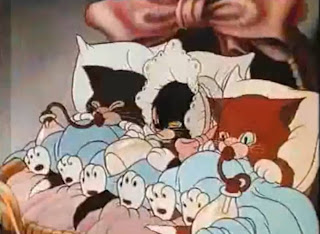 The feather sequence is the real standout of this short. The way the camera tracks the lead kitten through that scene is remarkable, and to follow it up with the piano gag is great work. A little more work like that in the beginning of the short would make this one a classic, but as it is, it’s just another “cute” short in the Silly Symphonies series.