When I think of Silly Symphonies, Music Land is the short that I think of. It was one of the first Silly Symphonies I saw, and to me, it defines what the series is all about. It tells a great story, done entirely through animation and music, with no dialogue, and manages to entertain for nine and a half minutes without fail.

If you haven’t seen it, you need to. The basics are that it’s a take on the Romeo and Juliet story, but this time told from the view of musical instruments. The opening shot reveals our two kingdoms – The Isle of Symphony and the Isle of Jazz. Between them lies the Sea of Discord, a fun play on words, but also an easy set up to let the viewer know that there is dislike between these two kingdoms. 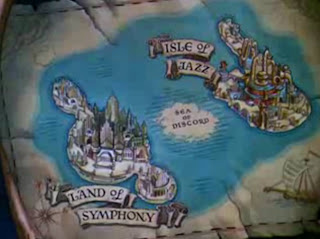 As seemingly always happens in these tales, the princess and prince of these two lands fall in love. The violin princess from the Isle of Symphony waves heartily at the saxophone prince of the Isle of Jazz, and soon he is on his way over to her in a raft. They meet, and begin a quick chase around the island, young lovers to the max. 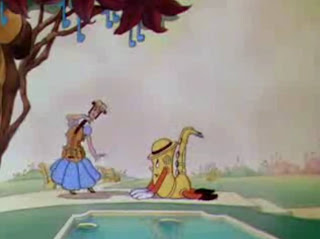 Things go horribly wrong (a Disney staple) when the queen of the Isle of Symphony finds out what is going on and throws the prince in the metronome prison. It’s a great trick how everything in these two islands relates to their theme. The metronome prison is a good example, but even better are the weaponry. 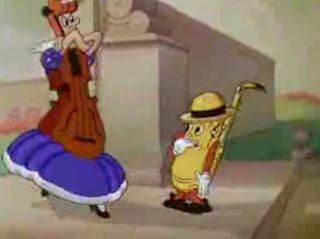 When the king of the Isle of Jazz discovers his son is imprisoned, he brings out the brass. And no, I don’t mean important generals. I mean the brass band, including trumpets, tubas and more. The king launches attacks on the Isle of Symphony by e artillery.e band, with the notes servicng as the artillery. 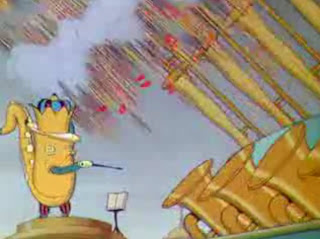 That’s a neat touch, but the queen tops it. The tops of the organ pipes turn from upright to facing the Isle of Jazz, and begin blasting them with notes. 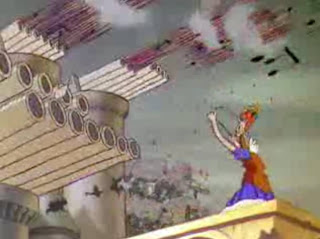 The amazing part of this is that it should sound terrible from a musical standpoint. You have loose, free flowing jazz interrupting symphonic music, but it works. The composition of the two plays off each other and intermingles to make a great sounding piece.

Finally, the two children row out to meet each other in the Sea of Discord, and their danger causes the two grown ups to call a halt to the proceedings. And, when the king and queen meet, they spark up a romance as well. All ends well with the queen marrying the king and the prince marrying the princess, and instead of the Sea of Discord, we have the Bridge of Harmony.

This short manages to use music to tell the story, which is what works best in the Silly Symphonies. It’s not just an accompaniment for dances or actions that are not relevant, it’s an integral part of the storytelling. I think this, too, is important for Disney moving forward. Using music to tell stories is a big part of the features, and it is done very well in Music Land.