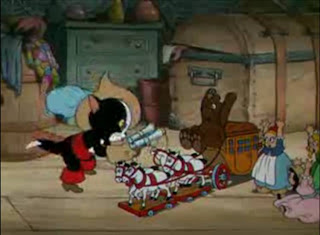 The titular kitten is a great design, reminding me somewhat of Figaro from Pinocchio. Butch, as he is called in the short, is a kitten very adept at playing cops and robbers at home. But, rather than take a bath, he wants to escape and become a real robber. 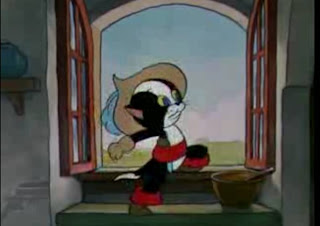 Snatching a bag of cookies, Butch takes off, but he soon runs into a real bandit, Dirty Bill, played by a bulldog. This is where the short turns into a fun look at the two characters. Butch and Dirty Bill hit it off, but we get to see a little more about who they are, as the majority of the short is the two of them sitting in the forest talking. 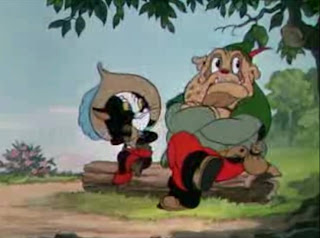 Dirty Bill extols the virtues of robbery as a career, and Butch joins in. Butch spins a yarn about the stagecoach he robbed that morning, which is a complete fabrication. It’s a cute touch, because the opening scene of the short is Butch holding up a toy stagecoach. Then, when he recreates the story for Dirty Bill, it’s acted out in the animation. The loot, really the cookies that Butch took, is made out to be jewels and gold. 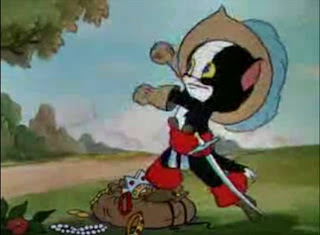 Of course, Dirty Bill starts threatening Butch, who turns tail and runs back home, jumping into the bathtub he had run away from in the first place. It’s a great story, that has no standout animation or new and exciting components. 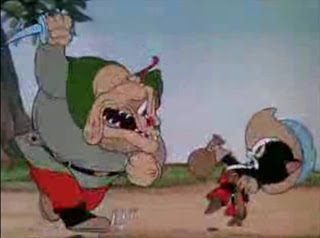 What makes this one somewhat interesting is the fact that the two main characters don’t perform any action, with the exception of Butch’s “flashback” to the stagecoach robbery. Instead, the story is all about the two of them talking. That’s difficult to pull off, but it is done well here.

Again, this is a step that had to be taken to get to features. If Disney were unable to hold audience interest in conversation, then they would not be able to carry a story through an entire feature. What’s interesting to watch through these Silly Symphonies is how they are taking steps to work on these things. First we saw the human figure of Persephone in The Goddess of Spring, then the mature themes of The Golden Touch, and now how to hold interest in a simple conversation. All of it is building my anticipation for Snow White, and we’re still a long way from there.