We’re back to black and white for Mickey one more time in Mickey’s Service Station, but it’s also notable in that it’s the first of the “Fab Three” shorts. Mickey, Donald and Goofy work together in this one, to create the amazing chemistry and laugh a minute fun that they would become known for over the next few years. 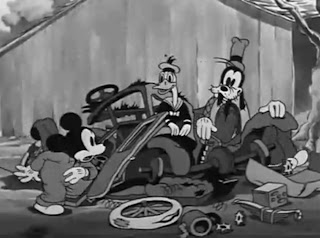 Like many of those later shorts, this one starts with the three of them on the job. This time, it’s as the attendants at a service station. The trouble comes when Pete, in his typical bully role, drives up with his souped up roadster, and demands that Mickey and the gang get rid of the squeak in his car in the next ten minutes. 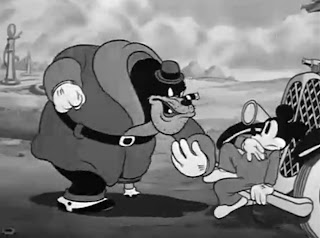 What follows is a rapid fire succession of gags, as the three tear Pete’s car to pieces trying to locate the source of the squeaking sound. Donald tears off the front grille and unwinds it like a sweater, Mickey pries a tire loose, Goofy climbs on the engine block and reaches all the way to the bottom, curving up to goose himself. That’s just the beginning. 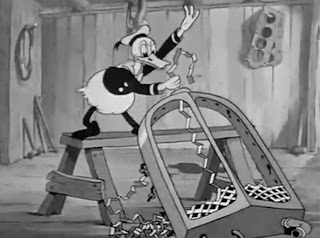 This is Disney animation at its finest, no doubt. The characters each get their own spotlight, and it is here that we see them developing the distinct personalities that they would become known for over the years. Donald grows more and more frustrated as he can’t locate the source of the sound. Goofy ends up harming himself more than anything else and Mickey is well, the least interesting of the three.

Whereas Goofy has his clumsiness to distinguish him, and Donald is the irritable one, Mickey doesn’t have a single distinguishing characteristic. It’s here that we are finally seeing what the animators dealt with, having a corporate symbol as the lead character. Mickey can’t be a goof or be angry all the time, so he simply goes through the short trying his best.

I guess you could say that Mickey is the hero, but that’s probably overstating it a bit. It is Mickey who discovers the source of the squeak, a little cricket. But Mickey is more the loveable loser than a hero type. It’s hard to identify with him more than the fondness you already hold for him as a viewer of these shorts. Just my opinion, of course, but it demonstrates what a change has come over our favorite mouse in the years since Steamboat Willie. 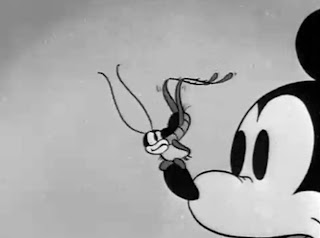 My two favorite bits in the whole short come near the end. First, Goofy accidentally jacks up the hastily rebuilt car, and ends up catapulting the entire lift mechanism into the air, landing in Goofy’s pants. Goofy stumbling about and trying to get the car safely back to the ground is classic Goofy. 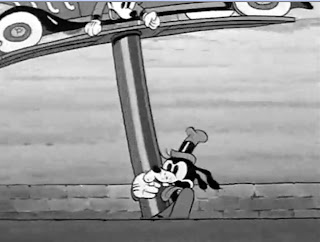 The final bit is Pete entering his car and starting it up. It predictably falls apart, but then the engine turns into a dog like character and starts chasing him. The humor of seeing Pete run off into the sunset chased by this car he obviously mistreated cannot be missed. 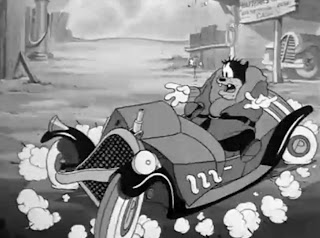 Mickey’s Service Station marks an ending and a beginning – the end of Mickey in black and white, but the beginning of the trio shorts – with Mickey, Goofy and Donald working together. I am really looking forward to the next set of shorts featuring these three, because they are some of my favorites.