The Tortoise and the Hare

We’ll start off 1935, a year where Mickey finally comes to color, and things really start moving in regards to Snow White, with another classic fable told in the Silly Symphonies. This time, it’s The Tortoise and the Hare.

We’re all familiar with the basics of the story: an overconfident rabbit races a turtle, and ends up losing because of all the detours he takes. The moral is simple: slow and steady wins the race. Knowing that it’s such a familiar story, how did Disney translate it? 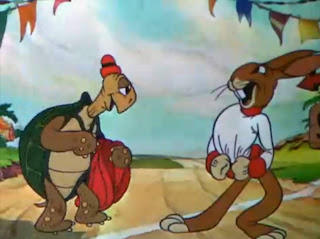 It comes off surprisingly well. Rather than a simple challenge, the animators chose to make the setting a well publicized sporting event. That adds much needed humor to the tale. Max Hare, the rabbit, comes out in a robe, just like a boxing match, as does the tortoise. That adds a bit of pomp and circumstance to the goings on, and makes it an event from the start of the short. 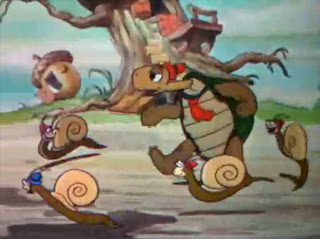 I’d be remiss if I didn’t note the similarities between Max Hare and the later Bugs Bunny over at Warner Bros. A bunny began appearing in Warner shorts around 1938, but the Bugs we know and love began in full in 1939-1940. His appearance then is very similar to that of Max Hare. Is there a connection? Sure is. Chuck Thorsen, who was on the Disney staff at the time of this short, later went to WB and worked on Bugs. 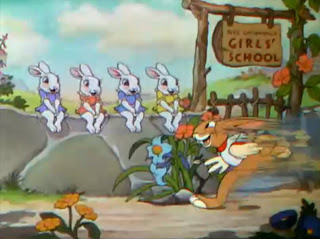 That’s not to say that Max and Bugs are the same. They certainly are not. Most people credit other animators at Warner for Bugs, but Thorsen was definitely involved. Just something to keep in mind.

Max Hare would go on to star in other Silly Symphonies, which we’ll get to, but his trademark here is his cockiness. He is so sure he’s going to win the race, and he stops not once, but twice. The first time is simply a nap, but then he sees a gaggle of young rabbit girls. That really gets his attention. 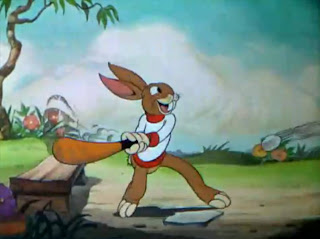 This is the scene that really makes you wonder about the Bugs connection. Max demonstrates his speed to the girls by doing both ends of a sporting feat. For example, he pitches a baseball, runs over and hits it, then runs back and catches it. Sound familiar? It’s very much like Baseball Bugs, a later short featuring the Warner rabbit. 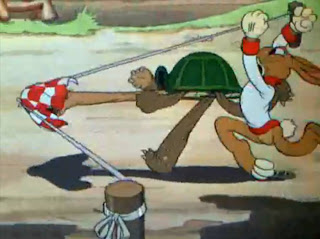 Regardless of that connection, Toby Tortoise also has future potential. He, too, would appear again after this short, and with good reason. The expression and movements of Toby are spot on, and communicate everything you need to know about him with minimal dialogue. It’s a great bit of work by the animators.

The sound effects stand out in this as well. When Max is running, we get a sound like an ambulance tearing through a city street. It’s very appropriate, because Max is knocking anything and everything out of his way. It really makes for an instantly recognizable sound cue, which is key to the short.

Max and Toby are great characters, and they come off particularly well in this short. It’s no surprise to me that they would be used again by the Disney staff, although in some different roles. We’ll look at those as we get to them.