The basic idea is that we are back in a land of cookies, similar to the cookie men from Hot Chocolate Soldiers. Back then we debated whether they were pastries or not, so I’ll just say that it’s a land full of cookie people. A parade is ongoing, featuring the candidates for Queen. There are various entrants, including Miss Candy Cane, Miss Licorice and Miss Banana Cake. 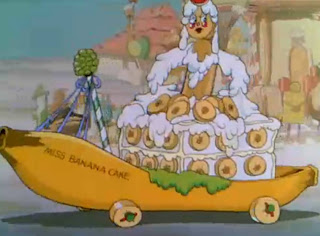 Off behind the parade, though, one young woman is crying, because she cannot enter the contest. She has nothing to wear and no float to pull her. A hobo cookie man shows up and plays Fairy Godmother, though, in a small twist on the Cinderella story. This is a really fun part of the short, as the hobo uses icing, sprinkles, and éclairs to make the young cookie girl into a real princess. 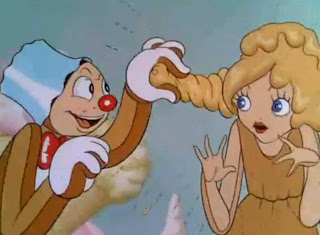 Of course, she wins the contest, completing the fairy tale. But what is interesting about this short is that this moment comes only halfway through the short. The rest of the short focuses on the selection of a king for the queen. It’s this part that is most interesting to me. 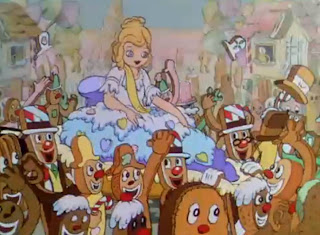 The elders of the cookie town wheel up a carousel, and as the carousel rotates, a curtain opens, revealing the king candidates inside. We get old fashioned cookies, angel food cakes, devil’s food cakes and even rum cakes. What’s interesting to me is the whole carousel idea. It brings to mind two later Disney innovations. 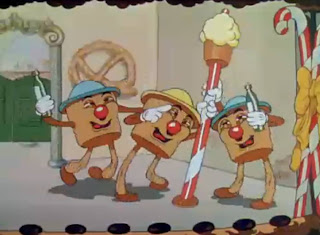 As Walt was getting ready to build Disneylandia, a traveling show of miniatures, he used a stage similar to the framing of this carousel to reveal his dancing figure. Later, this rotating carousel idea would be used in the Carousel of Progress. It’s so interesting to see the same thing here, decades earlier. 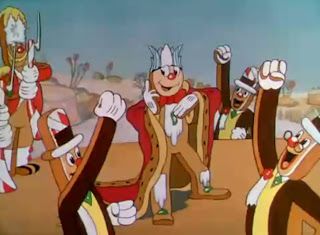 Finally, of course, the hobo gets chosen as the king, and there’s some cute bits around the two trying to sneak a kiss. That’s what makes this short, though, is the interaction between the hobo (voiced by Pinto Colvig) and his queen. They are loveable characters who you want to see succeed. That’s the heart of any good story, but especially a Disney story.