This is a perfect short to watch right before/after Christmas time, because it features Mickey and the gang ice skating. It has some iconic images of all the Fab Five, and features a little more exploration of the group dynamic than we have seen before. This short shows us how the five most popular Disney characters play together.

My favorite shot in the entire short is right at the beginning, as we see Mickey and Minnie skating in tandem. This is one of my favorite stills from any Mickey short. It’s on a shirt my wife has, and I have seen it many times during the holidays on clothing, pictures, toys and the like. It’s a perfect expression of the two mice together. 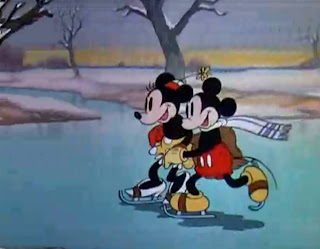 But, as has been the case recently, Mickey is merely a sideshow in this short. He does get a brief headlining run, taking a turn through the ice rink to be a daredevil. This is honestly the most we’ve seen of Mickey in his recent shorts, and it’s nice to see him interacting with Minnie and performing for the camera. 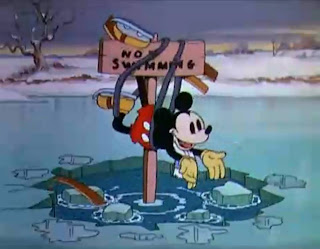 Goofy gets the next bit, with an interesting scheme to catch fish. He shaves off bits of tobacco and drops them down a hole in the ice. The fish start chewing, but then they have to spit! This was a great gag, as the fish come up to spit in a bucket that Goofy left out, but of course, he tries to clobber them with disastrous results. 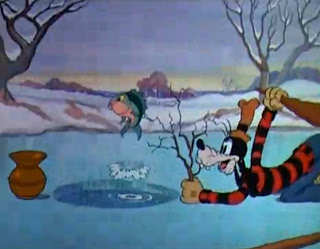 The bulk of the short, though, is Donald and Pluto. Donald catches Pluto napping and slips skates on him, and we see Pluto go through several minutes of trying to learn to ice skate. Again, as in Pluto’s Judgement Day, we see why Pluto was a star. The silent, slapstick humor is fantastic. 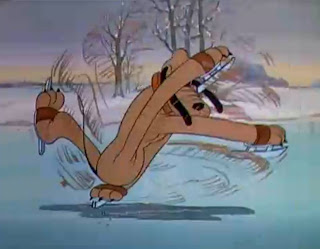 It’s interesting to see the difference in the humor between the Fab Five. Goofy manages to do a vaudevillian slapstick, as does Pluto, only silently. Mickey’s gags usually involve a little more self deprecation and sheepishness, while Donald’s all come out of frustration or anger. 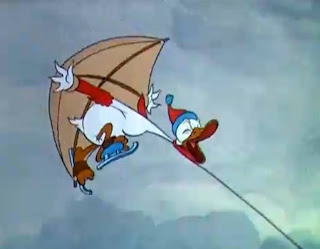 I say that, but Donald’s main gag here is getting swept away by the kite he is wearing on his back. Mickey has to unravel his sweater and fly him like a kite to save him, at which point he crashes into Goofy’s ice fishing hole and gets licked by Pluto. It brings the whole thing to a satisfying close.

On a side note, I went ice skating a few days ago, and it was nothing like this. I fell. A lot.