Pluto has been hanging around the background of Mickey’s shorts for some time, occasionally stepping forward to take the spotlight for a portion of the short. With Pluto’s Judgement Day, though, Pluto becomes a full fledged cartoon star all his own. This short is classified as a Mickey Mouse short, but in truth, it’s the first starring role for Pluto. 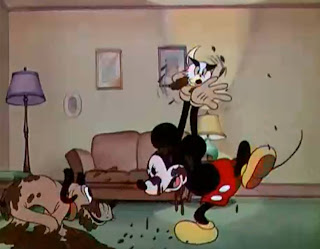 It’s strange, then, that one of Disney’s brightest characters, who generally is involved in fun and happiness, takes center stage in one of the company’s darkest shorts. Pluto’s Judgement Day is a grim short, but it has a great story and some fantastic animation.

The short opens with Pluto chasing a cat through the mud, into the house and ending up right on top of Mickey. This is really Mickey’s only role in the short, as he chastises Pluto for chasing cats and tells him to lie down. When Pluto snorts and lies down, that’s when the fun really begins. 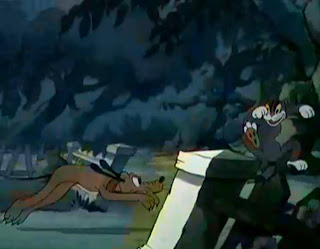 A ghostly cat peeks through the door, and entices Pluto to chase him. But it’s not Pluto who follows, but a spirit of Pluto that rises up out of the sleeping dog. It’s a clever way to show that we’re entering a dream sequence, because it leaves a little doubt. Is it really a dream, or something a little deeper? 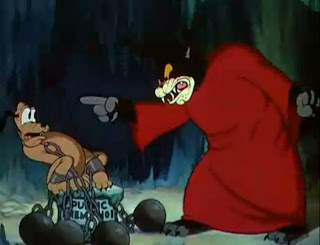 The cat is a trap, and leads Pluto into a courtroom, where he is branded as Public Enemy No. 1 and put on trial for his crimes against cathood. This is a scary, dark trial. The lead prosecutor is dressed all in red, bringing to mind thoughts of the devil, and the witnesses are creepy yet funny. 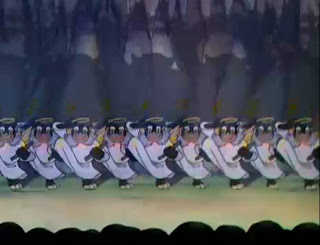 It’s a fine line to walk in this short. There is great humor in a large cat saying how fat he was and then was run over by a steamroller, turning to the side to show the audience how he has been flattened. It’s funny, but also a little scary to see this sort of thing. I can imagine that this short was one that inspired young Tim Burton to become part of Disney. 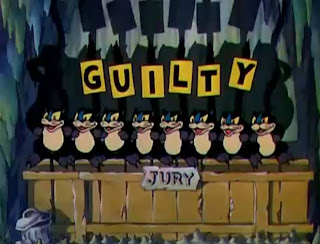 The parade of witnesses against Pluto continues with ghosts of all shapes and sizes, until finally, judgment is passed on Pluto. The verdict is guilty of course, and he is dragged towards a fire. As you can imagine, the ultimate vengeance is throwing Pluto into the fire, which wakes him up, as a coal from the fire in the living room hits him. Pluto ends up making up with the cat he chased at the beginning, and all is well.

This short had to be the impetus for later Pluto solo shorts. While Pluto himself does not have a lot to do, it shows some potential. Pluto is a great foil for other original characters, like the cats in this short, or Mickey in earlier ones. Using him would allow Disney the flexibility to have a consistent lead character but try out new characters in the same series. Pluto’s Judgement Day is a fantastic start to that series.