We’ve discussed before how the Silly Symphonies are a sort of proving ground for Walt’s ideas, and how the animators could experiment with their craft. It’s also the place where the animators are getting their skills ready for the grandest experiment of all – a feature film in the form of Snow White and the Seven Dwarfs.

The Golden Touch, today’s subject, is one of those experiments. But unlike others we have seen before, the new thing is not some form of animation or camera trick. Instead, it’s the seriousness and raw emotion of the subject matter that is so striking about this short.

The story of King Midas and the golden touch is a familiar one. A king who loves gold is offered the chance to turn everything he touches into gold. When he accepts, though, he finds that it is a curse more than anything else, because he cannot eat, he cannot touch another person and he cannot live a normal life. 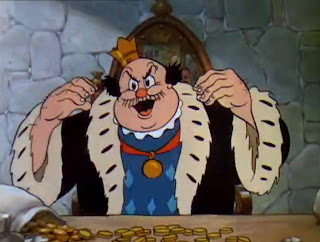 This short follows that script, but it is extremely emotional and serious. The opening of the short features a minute and a half close up of King Midas, singing about his love of gold. It’s a fantastic piece of animation, because the camera never moves, but as a viewer, I was fascinated the entire time. 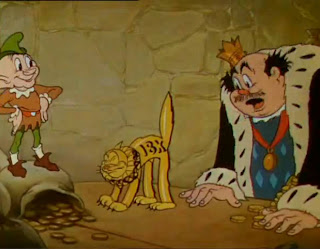 A little elf, Goldy, appears to offer Midas the golden touch. But there is more malice than whimsy in Goldy’s emotions, which adds a touch of fear to the proceedings. Midas’ desperation to get the golden touch is also stunning, because it is not as cartoonish as you would expect. You feel the raw emotion of this desperate man, and it’s almost frightening. 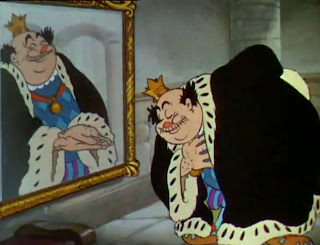 The predictable happens next – when Midas goes out to celebrate he turns half the garden to gold, to his delight. But, when he sits down to indulge his insatiable appetite; he cannot, because the food turns to gold. It’s the next sequence that is so very real and beyond the level of what we’ve seen before from Disney. 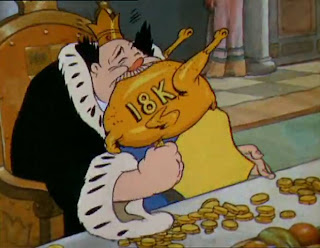 Midas returns to the mirror, but this time sees a golden Grim Reaper menacing him, and flees. This is not a cartoon reaper, but one that is definitely going to take his target. Midas runs back into his gold room, and Goldy reappears. The delight that the little elf takes in the King’s predicament is understandable, but a little scary. 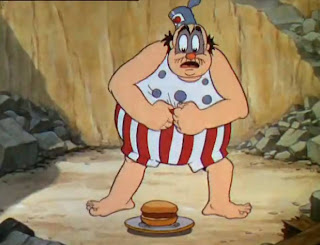 In the end, Midas trades his entire kingdom for a hamburger, a more contemporary take on things. It’s only at the end that there’s a little comic relief, as Midas’ clothes shrink up and he devours the burger.

Throughout this short, though, the prevailing sentiment is dread or revulsion. It’s set up like a classic horror tale, to be honest. The achievement of real emotion beyond laughter in a cartoon was an important step for Disney to take. The scary Evil Queen from Snow White would not have been possible without first taking the steps taken in The Golden Touch.