The Mickey Mouse we see in Mickey’s Kangaroo is a Mickey in transition. This is his last black and white short, before we return to glorious Technicolor in the Mickeys (I incorrectly stated that it was Mickey’s Service Station. My apologies). But there is much more.

The story of the short is that a friend has sent Mickey a kangaroo. The question of why Mickey has friends in Australia and why that person would think to send him a kangaroo will remain one of the mysteries of the Disney imagination. The kangaroo is a boxing kangaroo, and between Hoppy the kangaroo and its offspring, they do a number on Mickey and Pluto. 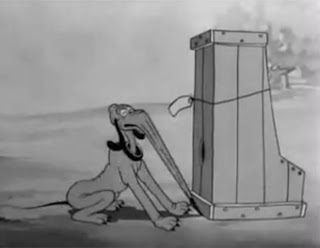 What was more interesting to me, though, was watching Mickey in this short. As I mentioned, the short opens with a box containing the kangaroo arriving in the mail. Mickey reads the tag that says his address is Hollywood. This is not the first time Mickey has been identified as living in Hollywood, but it is odd when looking at the rest of the short.

The rest of the short is set in a barnyard setting. It’s sort of a throwback in that regard. Pluto runs into a chicken coop, Mickey boxes the kangaroo in a barn, and there is livestock all over the place. That seems a little off when thinking of living in Hollywood, even in 1935. 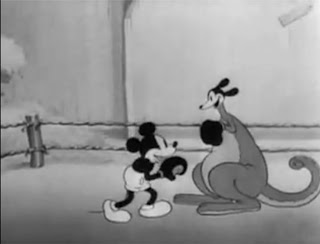 So we see Mickey in transition from his barnyard days to the life of a Hollywood star. But also, as we’ve seen in recent shorts, he’s moving away from being the center of attention. This short is really more about Pluto, and his character makes a bit of a change here. 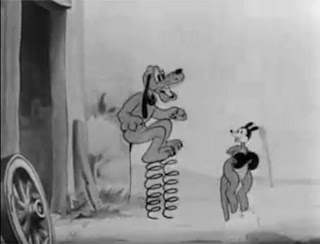 We see Pluto as normal, barking and playing with Mickey, until the kangaroo shows up. Once he starts getting tormented by Hoppy and her son, a new side of Pluto emerges. It’s a strange side, in my opinion. 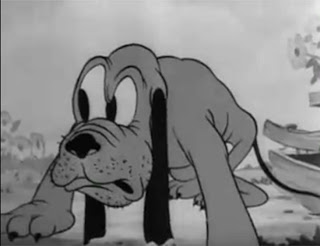 Pluto breaks the fourth wall, speaking directly to the viewer, leaning into the camera, and uses a menacing voice. This voice tries to convey Pluto’s thoughts, and speaks about how he will get rid of the kangaroos. Frankly, it’s just weird. We’ve seen Pluto with the devil on one shoulder and angel on the other, and this is really just another version of that. But for some reason, it seems a little odd.

It’s definitely an experiment. Towards the end of the short, the small kangaroo and Pluto manage to make up, and the menace in his voice goes away. That sort of redeems the character from his earlier growling voice, but it still is strange. 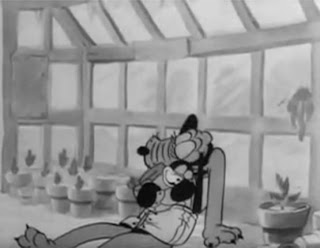 Notice I haven’t talked much about the gags or story of the film. That’s because there’s not much to talk about. The gags are not that great, and aside from the Pluto experimentation, there’s not much else of note. The one other interesting note was that the kangaroos make a honking sound, that to me sounded a lot like the Road Runner. Don’t know if that means anything or not, but it was interesting. Mickey’s Kangaroo is an okay short, but definitely not one of my favorites.