I have to admit, this was a tough one to get through. After years of advancement in storytelling and plotting in the Silly Symphonies, Water Babies seems like a step backwards. It has great character design, but that really is the only thing I liked about this short.

The short is a throwback to things like the “season” shorts of Spring or Summer. It features an opening scene where we see flowers unfolding to reveal small babies inside, who then proceed to frolic and play throughout the pond area. That’s the whole short. Nothing more to it than that. 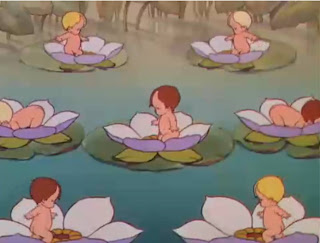 Unlike previous Silly Symphonies that did not have a plot, Water Babies does not even feature good characters and great gags. The babies, while very cute and nice to look at, are practically indistinguishable from each other, and thus it is very difficult to connect to them. And the gags? There just aren’t that many of them. 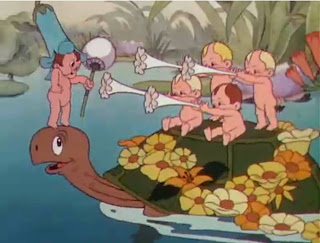 This is an issue that has been popping up lately in the Disney shorts we’ve reviewed. Even in the Mickey shorts, the number of gags is slowly shrinking, as the focus has shifted more to story and what happens with the characters. If done properly, like in The Golden Touch, that’s not such a bad thing. However, that has not been the case in this short and others, like Mickey’s Kangaroo. 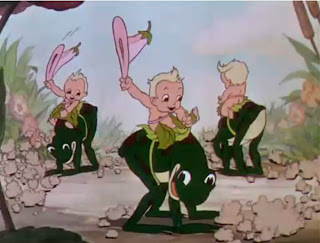 The main source of gags in Water Babies is the babes playing with some frogs. The frogs stand in for horses and bulls, as the babies act out little vignettes for each other. It’s strange, to say the least. There’s one sequence where a frog is caged up, and acts like a rabid bull. Once released, the frog chases one of the babies, and gets its head stuck in a flower. But at the end, after the frog has run off the babies, he pulls the flower off his head and reveals himself to be in on the act. Huh? 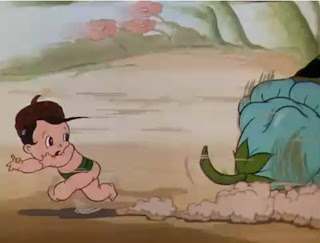 That’s the problem with Water Babies. Throughout the short, I did not understand all that was going on, and continually wondered why these characters were doing what they did. Sure, it was pretty to look at, and some of the scenes are very well animated. But I never got lost in the short, like I do with some of the Mickeys or even other Silly Symphonies. This one gets a hearty thumbs down from me. What do you think?