Once again, we have a short where the antics are born by the secondary characters instead of Mickey. But when those antics are so entertaining, you don’t mind so much. That’s the case in Alpine Climbers.

Donald and Pluto are Mickey’s companions this time, giving Goofy a break. They join Mickey in climbing the Alps, searching for edelweiss and eggs, apparently. This sets up some pretty amusing dynamics between the natural inhabitants of the mountain and our cartoon friends. 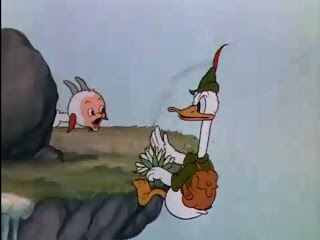 First, it’s interesting to see this Alpine short, as this is a subject that Walt would come back to several times. The film Third Man on the Mountain is one example of that, and that in turn inspired the Matterhorn at Disneyland. Clearly, something about the idea of Alpine mountains intrigued Disney.

This short also follows the recent pattern of having each character with their own set of gags, separate from each other. Perhaps that’s because it’s easier to animate, or because each character has their own approach to things, as I theorized before. Regardless of the reason, it makes this a short with two main threads – Donald and the mountain goat and Pluto’s adventures. 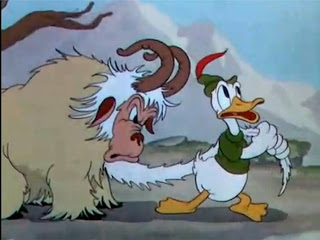 Donald’s troubles begin as he starts picking the edelweiss. A baby mountain goat pops up to start eating his treasures, which causes Donald no end of consternation. One of the great gags in the short is when Donald chases the goat around and around in circles, circling a rock. We leave Donald in the chase and hop to Pluto, but when we come back, Donald has worn a deep trench into the ground from chasing, while the mountain goat sits atop the rock laughing. 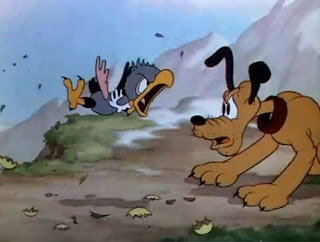 Pluto’s gags take a different form. At least in some respect, Mickey is involved, as he tries to gather the eggs, but ends up making a mountain eagle very mad. In the process, Mickey throws the eggs at the eagle, splitting them open to reveal baby eagles. It’s a fun gag, and one that leads to a baby eagle menacing Pluto.

Pluto’s stuff is probably the best in the short. He falls off of the cliff that Mickey and he just came up, all while chasing the baby eagle. Then we get the obligatory St. Bernard rescue dog coming to his aid. I’ve seen this gag in a multitude of cartoons, Disney and otherwise, but it still makes me laugh when the St. Bernard drags Pluto out of the snow and fills him with a “warming” beverage. 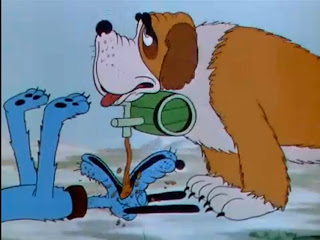 At least in this short, Mickey gets involved in the climax, as his fight with the mother eagle drags on. He calls for Donald and Pluto to get involved, leading to a madcap sequence where Donald charges the eagle, then both he and Mickey get tossed into the air and eventually dropped to the ground in front of Pluto. This sequence is particularly fast paced and fun, featuring Donald trying to fly by twisting his tail. 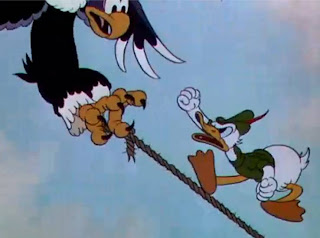 In the end, we see Pluto and his St. Bernard friend singing together after they have emptied the St. Bernard’s cask. It’s a funny and endearing image, which pretty much sums up my feelings on this short.