Once again, for everyone who has told me time and time again that Walt didn’t do sequels (even some complaining about Toy Story 3), I will point you to Three Little Wolves, the third entry in the Big Bad Wolf/Three Little Pigs drama. New elements get added to this one in the form of the title characters.

The Big Bad Wolf has picked up some sidekicks here, in the form of three smaller wolves who join him in his plot to catch and eat the Three Little Pigs. They’re neat little characters, well designed and interesting, but not developed individually. 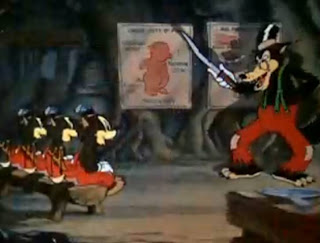 In many ways, the Three Little Wolves emulate what was going on with Mickey’s nephews, Morty and Ferdie, and are precursors to Huey, Dewey and Louie. This seems like a type of character that Walt wanted to establish in some way – a trio of mischievous youngsters. It would not take root here, but eventually, with the ducks, it did.

The story of this short is more centered around a variation of “The Boy Who Cried Wolf,” with the boy in this case becoming the two pigs who previously have gotten into scrapes with the Big Bad Wolf. While their older, wiser, brick-building brother works on a top secret “Wolf Pacifier,” the other two blow the wolf alarm horn, just as a joke. After his obvious anger, you know what had to come next. The wolf dresses up as Little Bo Peep, and says that she’s lost her sheep. We get the nice gag of the little wolves dressed in sheep’s clothing, and the thankful Bo Peep gets invited over to the pigs’ house. 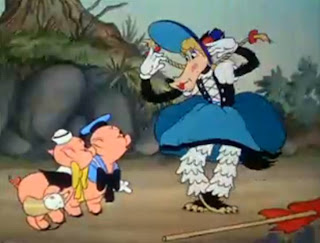 My favorite gag in the whole short comes next. As the wolf comes inside, he turns around and eyes the pigs, then locks the door and swallows the key. Rather than jump in fear, the pigs blush. They’re expecting romance with Bo Peep, not the wolf that jumps out at them. It’s rather funny and a little more grown up than other Disney shorts. 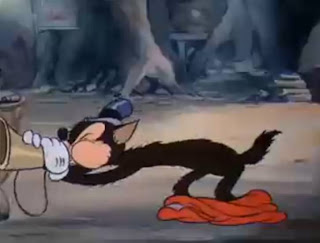 The scenes of the wolves chasing the pigs through the underground while the Big Bad Wolf leans leisurely against a wall are both amusing and menacing. When the pigs are captured, they at least manage to play some tricks on the wolves, taunting one of the younger wolves to blow the alarm horn. Then, they get the windbag Big Bad Wolf to blow the horn, bringing their brother running, after he ignored their pleas and the other blows on the horn. 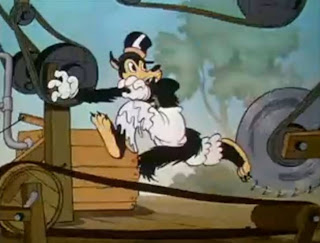 We finally get to see the Rube Goldberg-esque Wolf Pacifier in action, and it’s a doozy. The short is worth it just for that, no joke. What is interesting is that Disney did not go further in making the Three Little Pigs more of series. They might not have much story potential, but using the characters in different ways could have given us different Disney cartoon stars. Imagine a world where we have Three Little Pigs meet and greets in the parks rather than Donald Duck? It could have happened.