As Leonard Maltin is kind enough to tell us on the introduction to the “From the Vault” section on the More Silly Symphonies DVD, the time in which these shorts were made was different than our time. That’s obvious, I know, but specifically, Maltin is referring to the caricatures of race and nationality and how they are depicted in the shorts.

One of the examples he gives is from Broken Toys, in the character of Stepin Fetchit, which is a caricature of the actor by the same name. This, along with the Mammy doll character, similar to others in earlier Disney shorts, gives us some of the more racially insensitive moments to date, but only by today’s standards. Neither caricature is particularly mean spirited, especially if you are at all familiar with Stepin Fetchit. 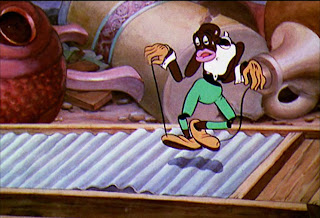 These are not the only caricatures in the film, either. I recognized WC Fields immediately, but there’s also comedian Ned Sparks and actress Zasu Pitts as a jack in the box and an empty sawdust doll, respectively. The caricatures are there to allow the audience to connect to the characters more quickly, since a majority of the film is not spent on characterization, but on moving the plot forward. 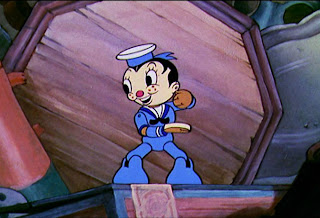 The plot is very charming, and appropriate since it was released around the holidays in 1935. A broken toy sailor is dumped into the local trash heap, and finds a whole community of broken toys around him. The toy sailor rallies the troops, so to speak, and proceeds to get them all fixed in various ways to get them out of the dump.

This is some of the best “assembly line” type work that Disney produced. We’ve seen stuff like this before in things like Funny Little Bunnies, Santa’s Workshop and others, but here, it’s a little more clever here and the characters are more individualized. There are great individual scenes like the sailor doll running a crane to transfer sawdust from one doll to the next, or the fantastic operation scene. 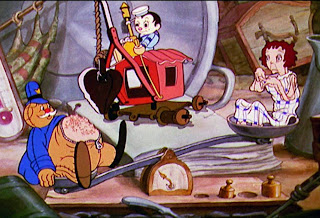 There are so many great little touches to this short that it’s hard to pinpoint the standout sequence, but the operation scene was it for me. One of the dolls is missing her eyes, and so the sailor decides to sew some on her. From Stepin Fetchit working the breathing machine, to the crowd observing in a hanging basket, every bit of the scene breathes humor and tension at the same time. It’s wonderful. 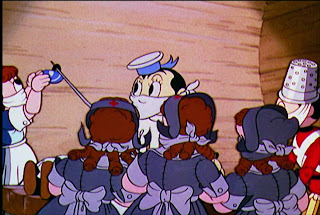 It’s also interesting to me to see the parallels with this short and later works by other companies. Think about the Island of Misfit Toys from Rudolph the Red-Nosed Reindeer, or the discarded toys in Toy Story 2, and then watch this short. There are definite similarities. 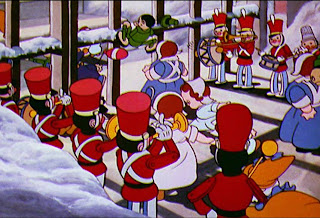 The ending, though, is what really warms the heart. The toys march themselves out of the dump, and over the hill into the town. The viewer only knows that they are marching through a gate, but it’s not until the very end, when the camera pans up to reveal a wreath over the door of the city orphanage, that you see their destination. It’s a beautiful ending to a very well done short.