Back to work today, after a fun two weeks off. Hope you all enjoyed the reviews over the holidays, but today we’re back at it with Silly Symphonies, specifically Cock O’ The Walk. It’s a short that relies on knowledge of the trends and ideas of the time, which makes it a little tough to relate to for modern audiences. 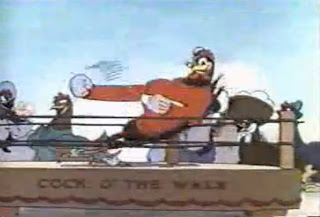 The basic idea is that a fighting rooster comes into town, and is celebrated by all the occupants of the town. There’s a parade, followed by some pretty elaborate dancing routines. He ends up catching the eye of a young hen, who leaves her current suitor in the dust and jumps into the ring to dance with the rooster. 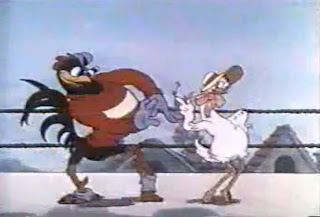 This is where you really need to know something about the films of the time in order to appreciate the film. The majority of the middle section of the film is taken from parodies of Busby Berkeley films. Dance sequences that mirror scenes from Berkeley are all throughout this part of the film. From dancing chickens twirling worms to a huge spectacle of hens and finally some peacocks, each sequence seems to have something new and different. 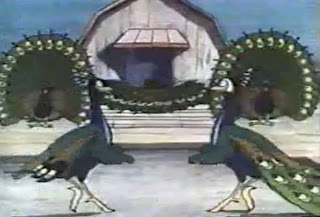 If you didn’t know about Busby Berkeley, or if you are reading this and you don’t, then you should. His films were the dancing musical spectacles of the 1930s that you probably have seen, but may not remember. For Walt Disney World fans, Berkeley is mentioned in the Great Movie Ride, as his work in Footlight Parade is one of the first scenes in the ride, and the trailer plays in the queue.

This short seems to be Disney’s version of a Berkeley film, which plays okay, but doesn’t come off quite as well. The glamour, glitz and acrobatics of those films don’t translate to animation, and the barnyard setting further dampens things. The animation work is good, but it seems that in trying to accomplish the parodies, it falls short on several counts. 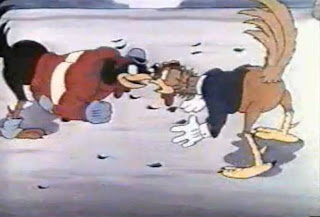 In the end, it’s a clever gag that resolves the whole thing. The hen discovers a picture of the fighting rooster with his family, including a wife and children. She leaves the rooster and kisses her former suitor, sparking him to victory in the ring over the rooster. They finish the short in a dance just the same as the one the hen did with the rooster. 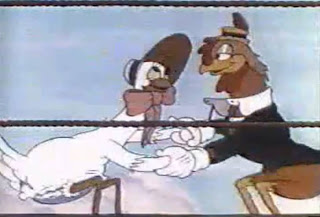 Cock O The Walk is interesting as far as the Berkeley parodies go, but it lacks a lot – there’s no big visual punch, the story is weak and the characters are not memorable. It’s the weakest of the recent Silly Symphonies in my opinion.