Ever wonder what would happen if they had a Mickey Mouse cartoon and Mickey never showed up? Well, then you should watch the latest “Mickey” – Donald and Pluto. The only appearance that Mickey makes is in the title card. Otherwise, this is a Donald and Pluto starring turn. 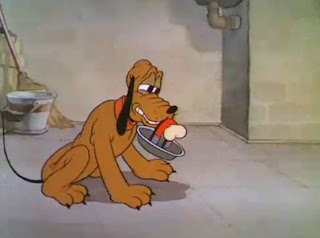 I’d have to qualify this as an early Pluto solo short, much like Pluto’s Judgment Day was. Pluto takes up the majority of the short with a simple premise: he swallows a magnet and ends up having all sorts of things being attracted to his rear end where the magnet is lodged. Pots, pans, knives, Donald’s hammer – they are all chasing Pluto throughout the short. 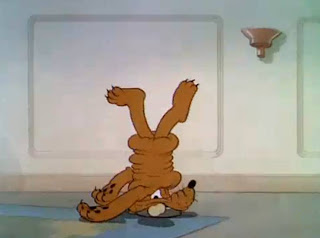 I feel that Pluto is the best work of the animators, because they can’t necessarily rely on human body language or voice to create mood or emotion. Instead, they have to convey Pluto’s mood through his actions. That’s a difficult thing to do, but it is done well here, as you get the sense of bewilderment that Pluto is going through as things keep attacking him. 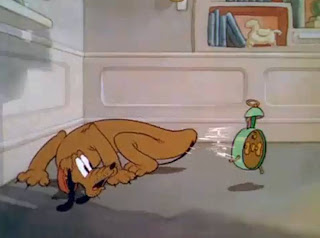 That’s the other thing that amazes me about Pluto, is that the animators always seem to keep in mind that he is a dog. The human reaction to the magnet antics would be much different than a dog. As a dog, Pluto spends half of his time trying to figure out what is going on, then trying to move on when he’s satisfied that it’s “over.” This is exactly what a dog would do, so it makes perfect sense. 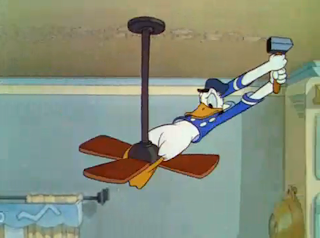 As for Donald, his role here is more of a bit player. He is there at the beginning, trying to fix some pipes in the basement, but for the most part, he’s absent. It’s his magnet that ends up getting swallowed by Pluto, though. Donald’s real role comes towards the end of the short, as Pluto, magnet still inside him, is on the roof, and Donald, holding a hammer gets stuck on the ceiling. 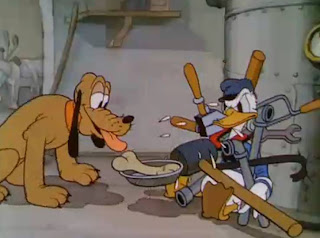 What’s not clear to me from this short is why Disney thought that Donald and Pluto would be a good pairing. They have limited interaction in the short, and their styles are not very complimentary. Donald’s aggressive, angry tone doesn’t match with Pluto’s simple bewilderment and innocence. Goofy and Donald play off each other well, but I don’t quite see the same thing with Pluto.