There is a lot of potential in the short Mickey’s Rival. It introduces a romantic rival for Minnie’s affection in the form of Mortimer Mouse, adds a fun character to the mix in Mickey’s car, and features Mickey in action once again, rather than being the man on the sidelines. However, in the end, this potential is seemingly squandered, as most of the elements fail to work together. 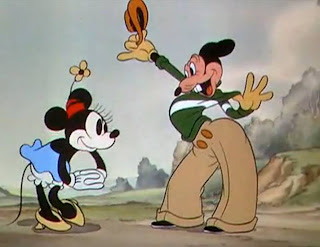 As you’d imagine from the title, the character of Mortimer, the new mouse who is interested in Minnie and tries to edge Mickey out of the picture, is the main part of this short. Mortimer is obnoxious, and comes off as just about the most despicable character I have seen in the Disney shorts. This may be speaking as a man whose wife has people constantly flirting with her, but guys like Mortimer drive me nuts. 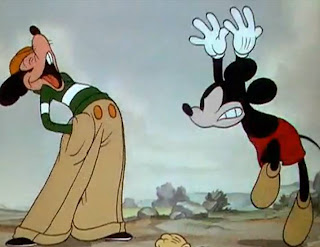 Mortimer is slick, conniving and cruel. He yanks Mickey’s buttons off his shorts, then electrifies his own buttons when Mickey tries to return the favor. Mortimer dines off Mickey and Minnie’s food and generally makes himself a nuisance. He’s the kind of guy whom everyone makes excuses for – “He’s only joking!” – and we all know a guy like that.

This is why I think that Disney dropped the ball on this short. Midway through the short, Mortimer takes to taunting a bull, waving the red picnic cloth in front of him. Unfortunately for him, there’s a hole in the fence that stands between Mortimer and the bull, and the bull takes advantage. But after the bull charges through, Mortimer disappears.

That’s sad, because Mortimer is a great foil to Mickey. He’s slick and smooth where Mickey is clumsy and awkward. It seems like a lost opportunity to establish Mortimer as much more of a villain for Mickey. 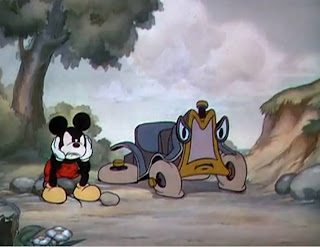 There’s another character introduced here that is very fun, and that’s Mickey’s car. There is no name given, but the car acts a lot like Bennie the Cab in Who Framed Roger Rabbit, moving his headlights, fenders, etc. to create the idea that the car is alive. The car is the hero of the second half of the short, taking the bull head on and rescuing Minnie and Mickey from a tree. 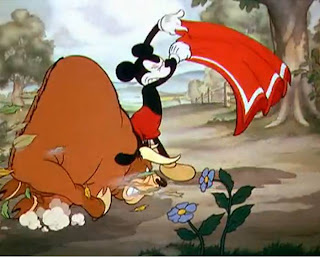 Mickey gets in on the action as well, dancing around with the bull, too. He waves the tablecloth in front of bull, tries to direct the bull away, and ends up getting run up a tree. It’s great to see Mickey doing something again, moreso than in previous shorts where he has been merely window dressing for the antics of Donald or Goofy. 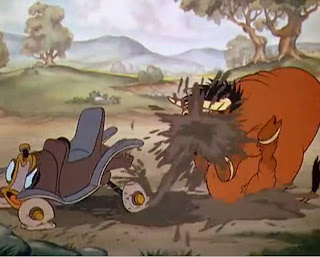 The problem is, the three things don’t work together – Mortimer is off screen by the time Mickey and his car take over, and Mickey and the car don’t appear together that much. A combination of all three would have made this short a building block for a new direction in the Mickeys. As it stands, it’s a good, not great entry in the series.