Just like yesterday’s short, Mickey’s Polo Team, today’s subject – Orphan’s Picnic – is a Mickey Mouse cartoon in name only. In fact, if I were to classify this short, I would call it a Donald Duck cartoon. Certainly, he is the star, and Mickey and the orphans exist mainly to torment him.

The plot is really just a setup for the gags, similar to the way the Fab Three shorts tend to be – Mickey and Donald have a job to do, and in the course of doing so, hilarity ensues. This time, it’s taking orphans for a picnic in the country. Not sure why Goofy misses out on this one, but be happy we get Donald along for the ride. 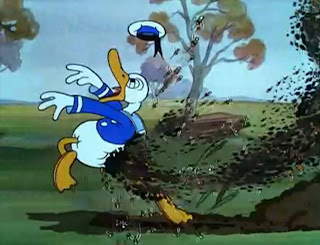 Gags here are really similar to that of Orphan’s Benefit, and in that way, you could consider this a sequel to that short. Just like before, the orphans are all designed to look like Mickey. And, like before, they take pleasure in antagonizing Donald Duck.

You can see the way this short will go from the very beginning. While the orphans are all packed into a truck, driven by Mickey, Donald is standing on top of the truck. It’s an appropriate spot for the person who will be the star of the show. 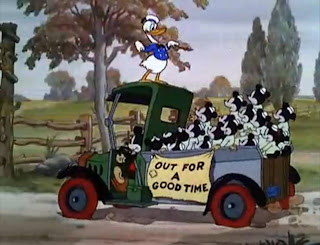 The remainder of the short is mainly composed of Donald trying to keep the orphans from stealing the picnic food, and failing miserably. There are some very creative gags, such as the orphans shooting arrows into the food and reeling it in, or swinging a rope swing down to steal a piece of cake right out of Donald’s hands. 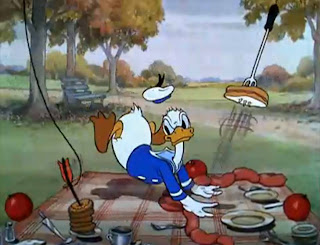 Since Donald is taking center stage here, it’s the first time we’ve really seen the potential for a full Donald Duck short or series of shorts. His performances in On Ice or Mickey’s Service Station were very promising, but this is where you can see how Donald could carry a short on his own. His frustration and futile attempts to thwart the orphans are hilarious.

The ending gag of bees chasing Donald is well trod territory, but there’s a new twist, as the orphans stick a bee in a sandwich that Donald eats. Seeing the bee twist Donald around from the inside out is quite the sight to see. 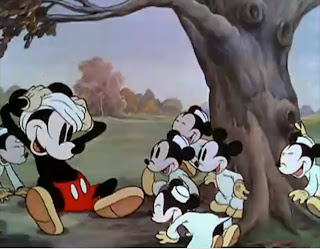 Orphan’s Picnic is notable to me because it really seems like a passing of the baton. This is where we see Donald Duck emerging as Disney’s top cartoon star, and Mickey begins to fade more into the corporate symbol he is today. Even though he has a brief moment in the short, it’s not very funny, and honestly seems out of place next to Donald’s tirades. This is what I would point to if someone asked when Mickey stopped being the same.