Quick note - this is my 250th post on the blog! Thanks to everyone for your support in keeping this going for over a year! Lots more to come, so keep reading.

One of the things that has been interesting to watch as we’ve gotten further and further into the Silly Symphonies is the two different approaches in the series. On the one hand, you have shorts that are looking to expand the medium and storytelling tools, such as The Goddess of Spring or The Golden Touch. On the other hand, you have shorts that are focused on “cute” stories that are familiar and pleasing. Elmer Elephant falls into the latter category.

Elmer is really a precursor to Dumbo in many ways, as it features a simplistic, cute elephant being mocked for his “handicap,” which later becomes his biggest asset. Elmer feels like a storybook, and the look and feel of this short reflects that. The characters are overly cute, and have alliterative names like Elmer Elephant or Tillie Tiger. 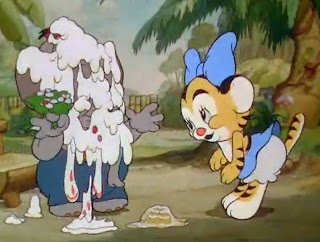 When Elmer heads to Tillie’s birthday party, he is at first encouraged because despite ending up with cake on his face, Tillie is rather taken with him. But after Tillie retreats into her treehouse, the other kids start teasing Elmer mercilessly. They are making fun of his nose, which seems odd, because, well, he’s an elephant. What did they expect? 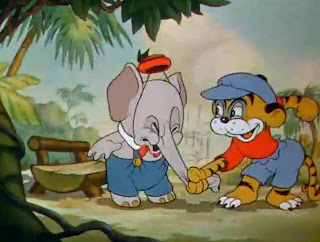 Regardless, Elmer tries to hide his nose, but runs off into the jungle in tears. The jungle is rendered beautifully in the backgrounds. It’s a far cry from the Alice shorts or the Mickey black and white shorts where the jungle was a flat surface with a few palm trees. This is a beautiful, watercolor background, and it’s one of the best features of the short. 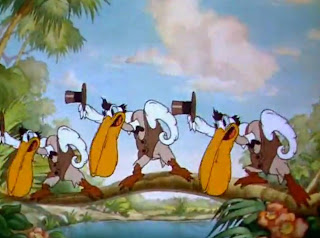 Elmer meets a giraffe in the jungle who tells him not to worry. It’s an admonition that really seems to fall short. The interaction between Elmer and the giraffe is strained, at least to me, and the best part of it is really the pelicans nearby, who do their best Jimmy Durante impression to convince Elmer that a large nose isn’t that bad. 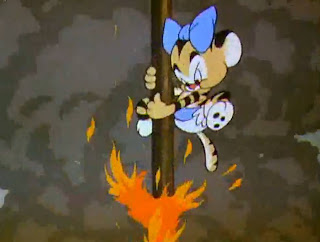 As I stated, the liability becomes an asset when a fire envelops Tillie’s treehouse, and Elmer rides to the rescue on the neck of his giraffe friend. The scenes of Elmer spraying the fire with his trunk are fun, and the movements of the fire to avoid him are some of the best animation of the short. 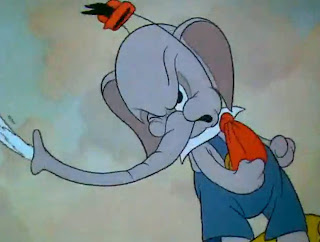