One thing that has appeared over and over again in the more recent shorts I have reviewed here are cameos/caricatures by Hollywood actors in the shorts. In Mickey’s Polo Team, this trend is taken to new heights. It also offers some great visual treats for longtime followers of the Disney shorts. 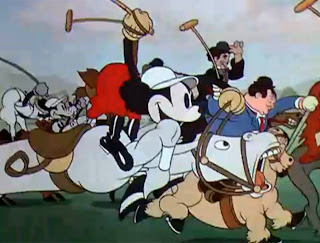 Where to begin? The premise of this short is that Mickey’s team of all star cartoon characters is taking on a team of movie stars in a friendly game of polo. Mickey’s team is listed as himself, The Goof (Goofy), the Big Bad Wolf and Donald Duck. Note that these were the biggest stars of Disney’s stable at the time, which is interesting. Pluto obviously couldn’t participate, and Minnie wouldn’t be involved, but the Big Bad Wolf is the big recurring character outside of the Fab Five. 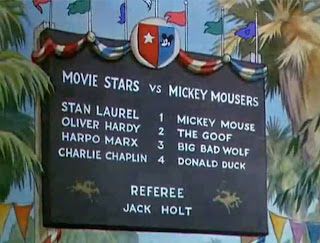 Against them is a team of movie stars, all comedians. Laurel and Hardy, Harpo Marx and Charlie Chaplin form the opposition. This gives the animators the opportunity to do some visual gags with the caricatures, which they take full advantage of, using the gag of having the horses mirror the people.

One of the best scenes for fans of the Disney shorts comes as Mickey’s team takes the field. As we pan to the stands, we see a cavalcade of Silly Symphony stars sitting around Shirley Temple. Immediately to her side are the Three Little Pigs, but all around you can see the stars of Who Killed Cock Robin?, The Golden Touch, Peculiar Penguins and so many more. 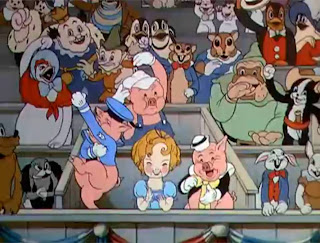 This is the first time we have seen these characters outside of their original short, and it starts the enduring notion that cartoon stars exist outside the universe where they were first seen, and are true Hollywood stars just like the movie stars. This notion would show up in a myriad of films, most notably in Roger Rabbit, but it gets its start here. 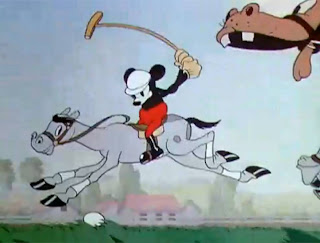 After that, the next thing that really stands out in this short is that although it is ostensibly a Mickey Mouse cartoon, he is rarely in it, except as a background character. The gags of the short fall to Laurel and Hardy as well as Donald Duck. They are the ones who perform front and center. It’s an interesting choice, as the Laurel and Hardy gags are nothing you couldn’t have seen in one of their films of the time. Donald’s gags are more outlandish and cartoon worthy. 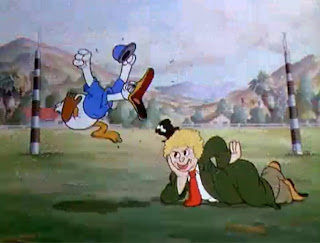 Overall, this short is quick moving, fun and entertaining. But it does not stand out as a purely “Disney” short, simply because the Disney characters are so little of the story. There’s much more focus on the movie stars or the cameos, but that doesn’t detract from a fun watch.