In 1936, the Disney Studio was well on its way to producing the first major animated feature, Snow White and the Seven Dwarfs. Therefore, output on the Silly Symphonies series slowed down, and there was a bigger focus on the Mickey cartoons, including more prominent roles from Donald, Goofy and Pluto. It can be reasoned that better artists were moving over to Snow White or the Mickey series. Perhaps that explains Three Blind Mouseketeers. 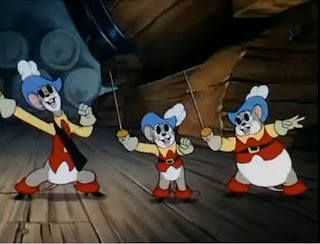 It’s not that this is a bad short, but it’s a one note joke, which is unusual for Disney. Yes, the lead characters are three blind mice who dress up like the Three Musketeers. As you would imagine, their blindness makes it difficult for them to do typical Musketeer things like swordfight, fight villains and the like.

So, the joke of the short becomes the way that the mice escape from constant danger, despite their blindness. The captain, played by a cat version of Pete, sets up traps for the mice, to no avail. We get an early example of how the short will go when the mice step out of their hole, looking for cheese, and the cat has set up an ax to swing back and forth in front of the hole. Oblivious to the ax, the mice stumble out of the hole and luckily avoid the ax. 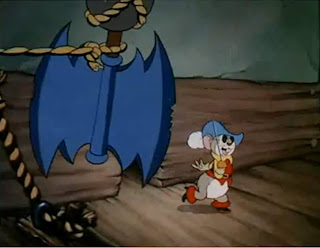 The same joke happens again when the mice find the cheese. Although the cat has set out elaborate traps for them, the mice somehow manage to blunder through and not get killed by the knives or bear traps. The ax gag was funny, but to repeat it was not as funny. Unfortunately, it doesn’t stop there. 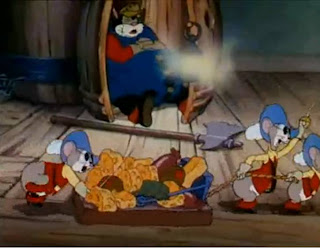 When the mice sneak away with the food, the cat sleeps. The mice carve up the cheese and sausages and more, ultimately waking up their adversary. But instead of a straight up fight or elaborate trickery, the mice have to engage in some blind gags to get away. The best gag in the short, though, is when the mice are delivering their “All for one, and one for all” line, but when the cat comes near, they scream, “Every man for himself!” I laughed a lot at that one. 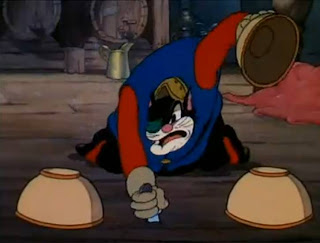 But after that, it’s just…uninspired. It’s interesting to see the cat play a shell game with one of the mice underneath a series of bowls, but it’s not particularly funny or clever. Same thing with the end of the short, when the cat runs away from the mice because he sees one of them cheering into a collection of bottles, and thinks the reflection in the bottles is an army of mice coming after him. 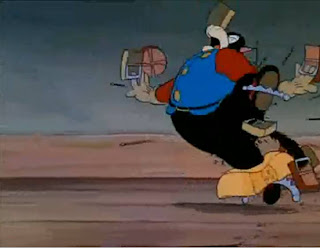 I think the problem is that the whole thing feels like a simple joke taken too far. It’s not entertaining for 8+ minutes to see these blind mice stumbling about. It could actually be offensive if you have thin skin. Not one of the better efforts in the Silly Symphonies.