One of my favorite types of Disney shorts is the combination of Mickey, Donald and Goofy in a jam. Their interplay is great, but usually, the best gags that Goofy and Donald have come in these shorts. Moving Day is one of them, and it’s a fun, silly little short that is quite entertaining. 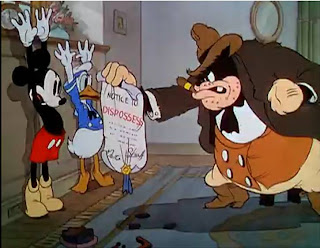 The premise is that Mickey, Donald and Goofy’s house is being “dispossessed” as the notice from Pete tells them. That means the three of them need to vacate the house as quickly as possible, to avoid Pete taking all of their things. That leads to all four trying to pack their truck and leave ASAP. As you can imagine, Donald doing anything in a hurry is comedy gold. 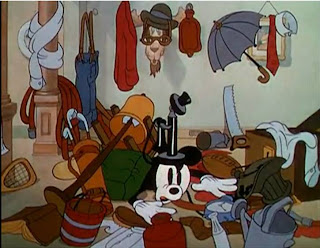 Goofy is my favorite of these three characters, because I want to go through life the way he does. Nothing seems to get him upset, even as things continually go against him. In this short, it’s the piano that vexes him. Goofy tries to load the piano on his truck, but the piano keeps sneaking back into the house. The work done to make the piano have emotions and personality is some top quality animation. 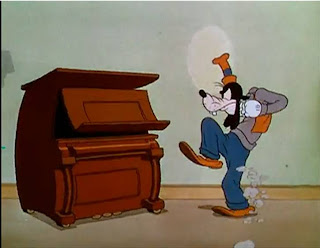 However, I’m afraid I’m much more like Donald, who lets everything drive him nuts. Moving Day features a fantastic gag, as Donald keeps getting stuck on things as he tries to hurry through the house and get things packed. First, it’s a plunger that sticks on his tail, then a fishbowl on his tail and the plunger on his head. The shot of Donald looking into the camera with both items stuck on him is a classic. 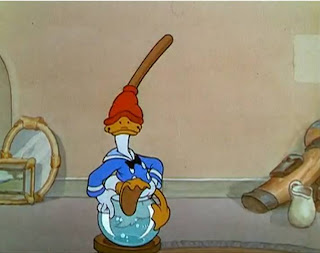 Mickey again doesn’t play into the short very much. He is there in the beginning, pacing the floor, and is seen packing one suitcase, but after that, the focus shifts almost entirely to Goofy and Donald. They are clearly the more entertaining pair by this point, and the gags in this short prove that.

There is some lost opportunity, here, though, for Mickey to mix in with them. Since the short takes place in one confined area, it would make sense to have Mickey and Goofy deal with the same problem, for example. It makes logistical sense, but it might not make comedic sense. Goofy’s approach is to stoop to the piano’s level, but that may not be Mickey’s approach. Regardless, I think there could have been other ways to involve Mickey here. 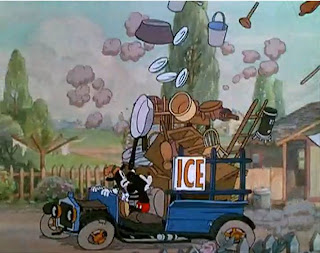 This is a great short, though. Donald and Goofy’s gags are well done, with Goofy’s taking a longer, slower period of time and Donald’s coming more rapid fire. This fits their personalities, though, so it makes sense. When Pete lights a match (after the gas has been leaking due to Donald) and blows the place up, you smile as all of the trio’s possessions fall onto the truck, ending with Donald getting stuck on the plunger again. This is a short that makes you smile, and that’s a great Disney feeling.