Yesterday I mentioned that 1939 was the big year for Donald Duck becoming the huge cartoon star of the Disney studio. A large part of that is due to story man Carl Barks, who was instrumental in building the “Duckverse” that went on to be the foundation of the Donald Duck and Scrooge McDuck comics, the TV show “Duck Tales” and even theming in the Toontown sections of the Disney Parks.

Barks is a Disney Legend for good reason, and you see some of his handiwork on display in Donald’s Cousin Gus, which introduces Gus Goose. Gus would later go on to appearances in the Disney comics, written and drawn by Barks. We’ve seen Barks and the other animators introducing characters through notes or references in other Donald shorts, but this is an important step forward by placing a new “duck” character in the short. Gus is a simple character, but he’s just the type of supporting character you need to build a universe. He’s mute, and only communicates by honking his tail. He is not bright, as evidenced by the opening gag of the short. He comes across Donald’s mailbox, and pulls a piece of paper out of his pocket with Donald’s name on it. But, since he has the paper upside down, Gus doesn’t think he’s at the right place until he turns the mailbox upside down as well! 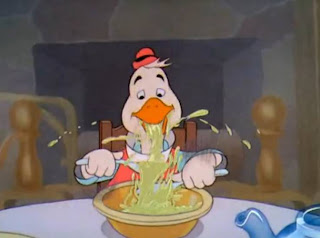 Gus’ defining trait though, has to be his gluttony. Despite a note from “Aunt Fanny” telling Donald that “He don’t eat much,” Gus proceeds to devour everything in sight once entering Donald’s house. In fact, that is the only gag of the short, is that Gus is going to eat everything. It’s the variations on that theme that keep this short interesting. 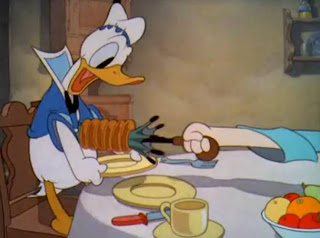 The gags at the table, where Gus knits spaghetti, sucks peas off a plate through a straw and does the classic “cut the cake slice and keep the cake” gag are all good. But as usual, it’s Donald’s reactions that make this one so funny. 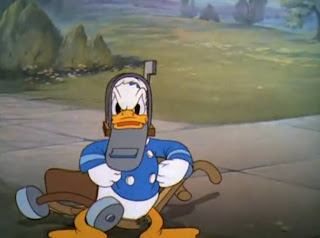 Donald’s solution is to feed Gus a “barking hot dog,” which I admit, is a new one on me. The dog, once consumed, keeps barking in Gus’ stomach, chasing Donald up a coat rack and ultimately out the door. It doesn’t work, though, as he just ends up back in the house through the back door, and sits in the icebox to eat. 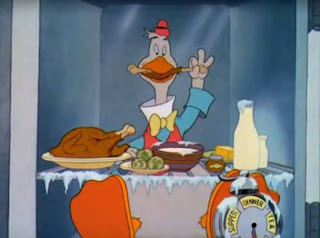 This short is simple, but it’s part of a larger tapestry that the Donald Duck team, and one would infer, Carl Barks, are trying to weave. We’ve already had Huey, Dewey and Louie introduced, and now Gus Goose. Aunt Fanny and the boys’ mother were involved via notes. There is a plan in place here for a widening universe of characters for Donald to draw upon, and it’s kind of neat to see it unfold this way.