After the very different Mickey Mouse short, The Pointer, today’s subject seems like a return to form. After all, like many of the 1939 shorts, it’s a Donald Duck short, and it follows a familiar formula. Donald’s Penguin features Donald getting yet another strange person/animal sent to him, and hilarity ensues.

As you might imagine, in this case it’s a penguin that Donald receives, this time from “Admiral Byrd,” who is stationed in the Arctic. I could not find any reference to Admiral Byrd as a continuing character in the Donald mythos, but again, it’s an example of Donald building a back story and history with other duck/bird characters. 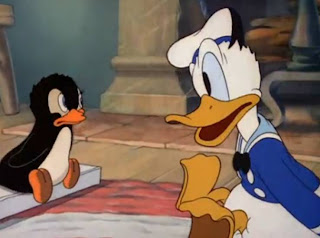 Also interesting is that the package is addressed to Donald in Hollywood, California. Just like Mickey, Donald has progressed from the farm animal that he was in The Wise Little Hen, to a suburban home owner. Not only that, but the idea of Donald living in Hollywood implies that he is a celebrity, and that the cartoon world is aware of it. It’s all very through the looking glass stuff, but interesting nonetheless. 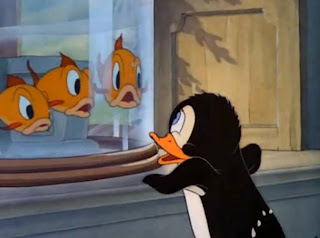 Where this short takes a little different turn is when Donald introduces the penguin to his pet fish. It’s here that there is a darker turn to the proceedings, as the penguin decides that it’s time to eat the fish. There is a dance that goes on between Donald and the penguin as to whether or not he actually is going to eat them. 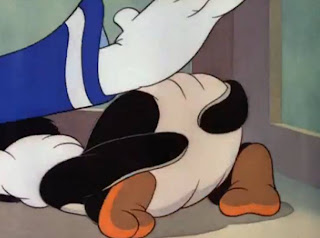 First, Donald accuses the penguin of eating the fish, even spanking the poor bird. But it turns out that he didn’t do it, and Donald is left in the embarrassing position of having punished him for no good reason. Any parent should be able to relate to that moment in the short. 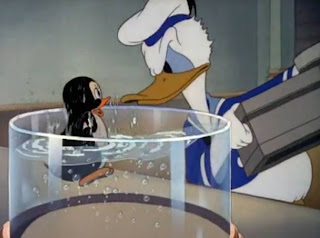 Then, things turn again, as the penguin actually does eat the fish. It’s such a strange turn of events, that I didn’t expect it. You think about Disney shorts and don’t expect there to be such issues as life and death, but this one deals with it.

Donald, not to be outdone, pulls a gun on the penguin! Ultimately, he can’t shoot him, which is good, but ends up dropping the gun and nearly hitting the poor little guy anyway. The short ends with Donald and the penguin making up, but it left my head swirling. 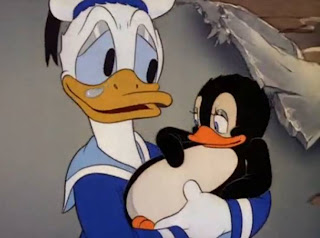 We’ve seen this formula before, obviously, with the kangaroo, Donald’s nephews and even his Cousin Gus. But this time, rather than harmless pranks, the penguin is dealing with eating Donald’s fish, which is a natural thing to do, but still deals with life and death in a way we haven’t seen before. Donald’s reaction is to escalate the conflict with the gun, which is logical, but not all that funny.

This short wasn’t so much funny as it was mesmerizing. It was very interesting to see Donald’s reactions, especially when he was counting the fish as they kept disappearing. But the final moments of Donald pointing the gun at the penguin and the “death” of the fish were just so compelling, for a bunch of reasons. This is a must watch just for that last few minutes.