Yet another Donald Duck cartoon! You’d think he was the biggest star ever, and about this time of 1939, he probably was. More to the point, it seems the animators enjoyed having a new toy to play with, unfettered from the safe, wholesome image of Mickey. With Sea Scouts, though, it really seems like they took a page from Mickey’s early days.

Let me explain. The Donald shorts have always been about Donald being confronted with an uncontrollable element or surprise situation that he tries to master, eventually becoming frustrated and angry. That’s the comedic formula, and it works really well. 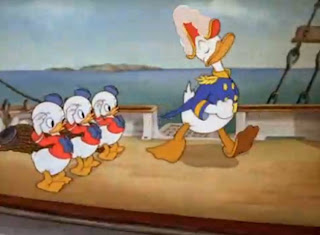 In Sea Scouts, though, the subject is Donald as the captain of a boat, and the situations he gets into and the resolutions are straight out of the early black and white Mickey shorts. There’s Donald hoisted into the air by the sail of a boat, Donald being chased by a shark even going upside down at one point and Donald getting stuck in a life preserver. 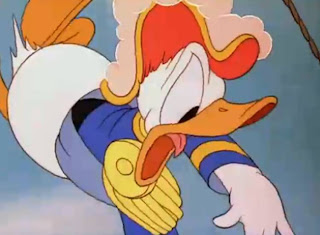 When watching this short, I flashed back to those early Mickeys, when Mickey would be the leader of a gang, and then something would go horribly wrong. Things like this happened all the time, and it’s unique, for me at least, to see Donald in that kind of situation. 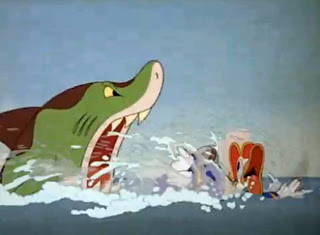 Helping things along here are the nephews, who play the crew on this ship. There is a great moment early on in the short when Donald asks them to drop the sail, and the sail drops right on his head. Donald looks straight at the camera and says “Sometimes they take me too literally.” 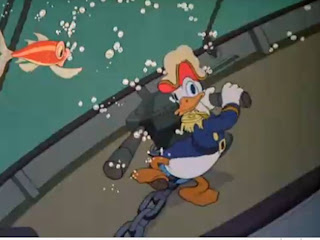 It’s laugh out loud funny, and interesting because it seems like a different kind of Donald. He’s still the angry, loudmouth duck we have seen before, but in this short, he is more of the commander of the situation moreso than we have seen before. There’s another nod to the camera when he’s trying to lift the anchor, but ends up pulling the ship underwater. 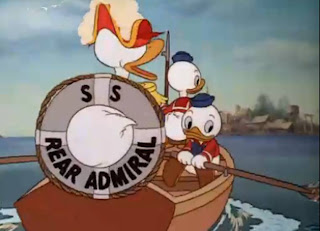 These sorts of things add a new flavor to Donald. He’s showing a different side of himself than he has in other shorts, and that’s a tribute to the animators. It’s what makes Sea Scouts so interesting. It’s not a revolutionary short by any mean. As I said before, it’s very similar to earlier Mickey shorts. But seeing Donald in this way is different, and it adds to his ability to become a long term star for the company.