1939 is a big year for Donald Duck. I would argue that it is the beginning of his ascendancy to the top spot in Disney’s cartoon pantheon, and I’m sure most of you would agree with me. His shorts are the most consistent and funny efforts from the Disney studio during this period. The Hockey Champ is no exception.

This one has a just plain hilarious opening sequence, as Donald attempts to imitate skating legend Sonia Hennie. He even does his feathers up into Hennie’s signature hairdo, and spends the first couple minutes of the short circling around the frozen pond making spectacular leaps and twirls in his skates. If it doesn’t sound funny, just watch it. 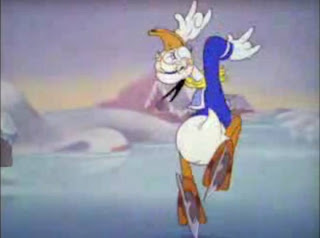 The real action, though, is when Huey, Dewey and Louie show up to try and play hockey. Donald reveals that he was the hockey champion of Duck Swamp, which is an acknowledgement of the full life of the duck beyond what we’ve seen on screen. Carl Barks, the animator who would go on to produce the majority of Donald’s back story in the comics, was a contributor to the Donald shorts at this time, so I wonder if this was his influence. 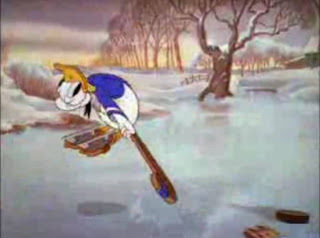 Of course, this leads to Donald challenging the boys to a hockey match. At first, things go swimmingly for Donald, as he repeats his Sonia Hennie performance only this time with a stick and the puck. The parallels between the first part of the short and this middle portion are quite well done, both showing Donald as extremely capable on the ice. It’s nice as a structure for the short. 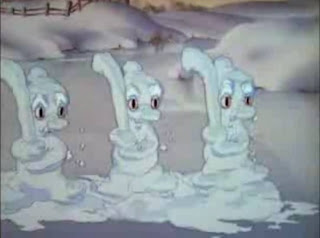 As in every Donald short, though, pride gets him in trouble. He plays the boys blindfolded, and the result is a furious dash through the snow and ice trying to catch the puck. This is where we really get to see the rapid fire gags and amazing quick animation come to life. There are points when watching the shorts that I get sucked in and quit looking at story structure or animation quality, and this is one of those times. 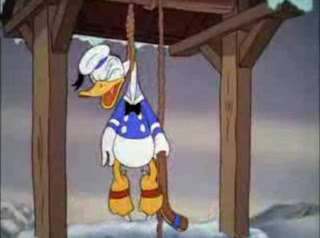 Donald’s nephews are such great foils for him, not just in this short, but overall. Because they combine childlike innocence with overwhelming mischief that is the perfect contrast to Donald’s bragging and prideful nature. Combine that with the frustration that makes Donald so funny, and it works beautifully. 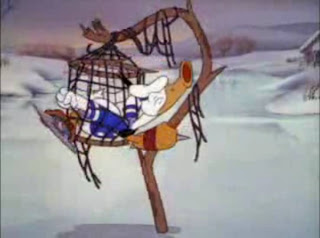 You could say that Donald’s shorts are formulaic – Donald sees something, tries to take control of it, and gets frustrated by it – and you’d be right. But if you have a winning formula, as long as you do it well, it’s okay. Donald’s formula is done very well, and the Hockey Champ is no exception to that.