We’ve come to the last of the 1938 shorts, and just like the previous two, it’s quite unique. In Mother Goose Goes Hollywood, Disney takes a crack at melding nursery rhymes and Hollywood parody. Celebs like Katherine Hepburn and W.C. Fields are featured as nursery rhyme characters. The results are definitely interesting. 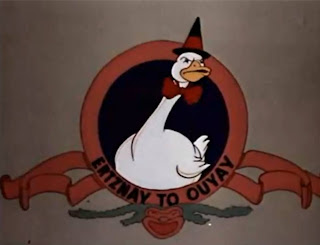 This short is similar in structure to another Silly Symphony, Mother Goose Melodies, with a touch of Old King Cole thrown in. The short opens with a book opening, revealing the characters within, who come to life and act out the tales they are known for. The twist, of course, is that in this short, the characters are all well known actors. 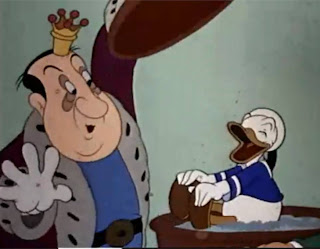 The running gag through the short is Katherine Hepburn as Little Bo Peep, searching for her sheep. In the way that only Katherine Hepburn can, she keeps repeating that she has lost her sheep and can’t find them anywhere. Not only does she open the short, but she closed it as well, and runs through a few others stories as well. 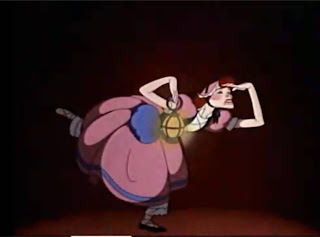 The vignettes with each different fairy tale or nursery rhyme are very brief, lasting less than a minute in most cases. That is a good thing in this case, because the gags are mostly about the fact that the stars of the short have taken the place of your favorite characters. Other than the visual gags like that, there’s not a great deal of other comedy. 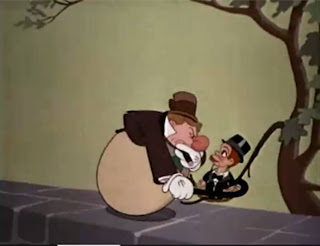 This short, I imagine, was a big hit in 1938. It parodies the biggest and brightest stars of the era, and delivers some good laughs. Even though I didn’t know everyone, it was still entertaining to see W.C. Fields take on Charlie McCarthy or Laurel and Hardy acting as the Simple Simon piemen.

The ending, though, when the entirety of the cast gets together for a dance, was interesting, but not all that funny. It’s really a swing dance, held together loosely by the idea that these are all well known nursery rhyme characters. There are some blackface characters, including another depiction of Stepin Fetchit, but it’s all done in fun, not to offend. 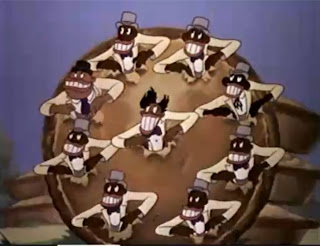 This short is quite a departure for Disney, especially from the recent work in 1938. There were celebrity caricatures before, such as in Mickey’s Polo Team, but since then, things had become much more focused on “timeless” tales about the core characters. Mother Goose Goes Hollywood is an interesting diversion from that, and is more intriguing for its difference than for its entertainment value.