I’ve just returned from a week at Walt Disney World, refreshed and ready to get back to work. Actually, truth be told, I’m exhausted, but thrilled to have gone. I hope to have some pictures and articles for the site from the trip up sometime soon. Welcoming me back, though, was another great Mickey short – Society Dog Show. 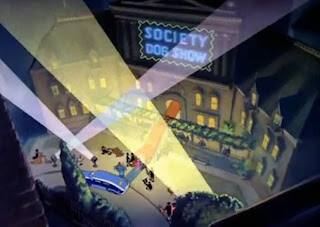 This short brought up a couple of easy comparisons to me. The short opens with Mickey entering Pluto in a very upscale dog competition, similar to the Westminster Dog Show that we see each year. Pluto is obviously out of place, and is derided as such by other owners, dogs and the judges. However, due to a tragedy with an old flash camera, Pluto ends up rescuing Fifi from a fire, and is crowned as the #1 Hero of the Public. 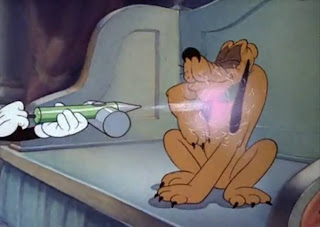 The first comparison this brings to mind is that Mickey and Pluto’s experience here must feel similar to what Walt felt going into Hollywood as he was working on Snow White. His original place in Hollywood as the producer of shorts was no challenge to the Hollywood elites, but when he ventured out into features, he was treated with disdain. Seeing the “cartoon guy” edge into the territory of the major studios was a shock to the system of 1930s Hollywood. 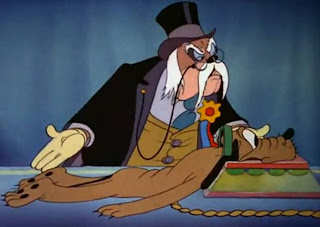 It’s odd to think of, when you look back at it, but Hollywood in the 30s was a definite closed system. The big studios controlled things and did not take kindly to outsiders like Walt trying to crash the party. Not to mention, that for all the sophistication that his work would eventually show, Walt was still a country boy at heart. 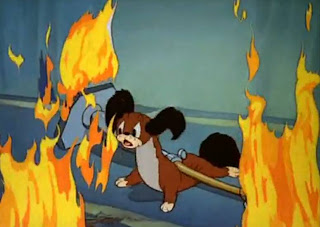 It shows just like Pluto and Mickey in this short, that Walt was crashing a high society party. I imagine that his feelings were reflected in the short, because you have to imagine that the animators felt the same things. The Disney Studio in those days was very much a familial atmosphere, especially in the build up to Snow White. Remember, this was the Depression, and these people were grateful to be employed and feed their families, and grateful to Walt and Roy for giving them that opportunity. 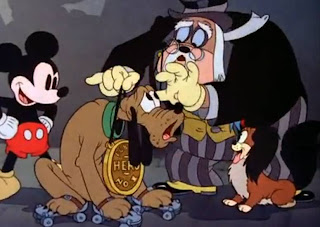 The other comparison was the ending of the short, where Pluto saves Fifi from the fire. Pluto’s charge into the burning building was an accident of sorts, as Mickey put him on skates and sent him in, but it was still heroic. It reminded me a great deal of the ending of Bolt, the fine Disney release of couple of years ago. If you haven’t seen it, you should.

Years from now, I imagine people will look back at Bolt as the canary in the coal mine of a third Golden Age of Disney animation. At the end of the film, Bolt rushes into a burning movie studio to rescue his owner, Penny. It was very similar to the ending here, complete with the dog being named a hero.

Society Dog Show was fun, with good gags and a nice set up. But the main thing I liked about it was the possibility that it was a window into something a little more informative about Walt and his team.