Although we have now reviewed all the theatrical shorts that Disney produced in 1939, there were two more works that came out from the studio that year. Both were produced specifically for companies, as ads to run in different places. 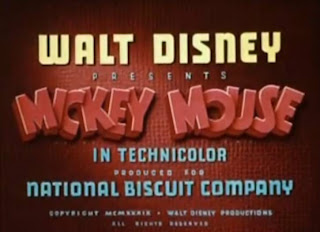 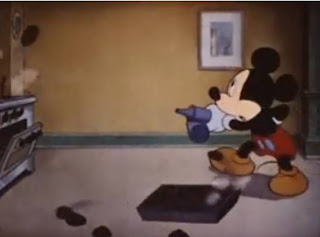 The story of this short is that Minnie is trying to surprise Mickey by baking him some cookies. In the middle of the baking, though, Fifi gets caught up chasing a fly, and knocks popcorn over into the dough. When the cookies hit the oven, they catch fire and start popping all around the room, much to Minnie and Mickey’s dismay. 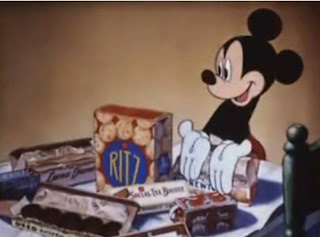 The solution is, of course, Nabisco crackers and cookies. Mickey runs out and retrieves the line of Nabisco products from the store, and all is suddenly right with the world again. It’s a funny short, especially when you consider the message – “You can’t make cookies, so buy ours!”

There’s not much of note to people watching the shorts that came before. One thing I saw was the color work was very different here than in the recent shorts. There was much more use of shading and tone to imply depth than you would see in a standard Donald Duck short, for example. Otherwise, though, it’s a fairly simple short.

The second commercial short was for Standard Oil, and was called The Standard Parade. Much like the Parade of Award Nominees short produced much earlier, it’s a simple parade of characters across the screen, all holding Standard Oil banners. 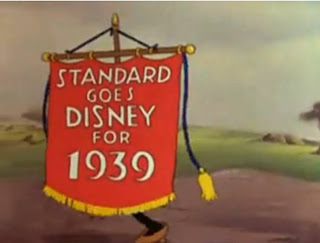 Again, not much distinguishes this, although I really enjoyed seeing the Seven Dwarfs carrying each letter of Standard, with Dopey bringing up the rear carrying two letters. The ad seems to be advertising a comic book that Standard would distribute in newspapers and with their products. 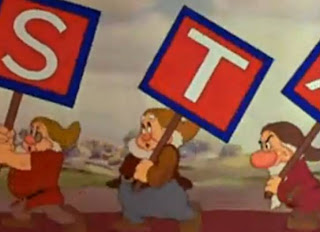 Both of these shorts are neat examples of how Disney looked for alternative sources of revenue, even back in those days. People who criticize the company for its aggressive money making posture today would be well served to look back at how Walt and his team found fun ways to make money back then.