You can probably imagine that a short titled Donald’s Lucky Day is going to turn out to be anything but for our favorite duck. You’d be right about that. But what’s really interesting about this short, the first of 1939, is that it is entirely different in mood and tone than any Disney short previously.

The 1930s are famous as a decade for the films that came out during those years. Not the least of these were the amazing film noir masterpieces. This short is not film noir – there is a clear hero in Donald – but the backgrounds, lighting and mood of the short are very much in that tradition. 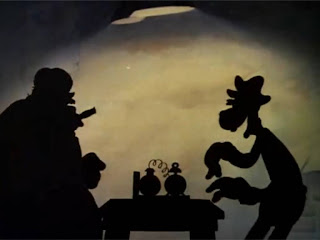 It all begins with a pair of gangsters, putting together a bomb. But the choice was made to show these two only in shadow, and it was a good choice. The idea that you never see these guys’ faces makes them only scarier. It’s a dark opening for a Disney cartoon, and somewhat jarring. That’s a good thing, though, because it shows Disney pushing the boundaries of what was expected from them. 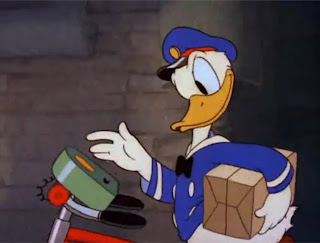 Donald comes into the picture as a messenger boy, tasked with delivering the bomb to the correct location by midnight. Again, an interesting choice here, as Donald’s bright primary colors are a sharp contrast to the dark, muted backgrounds. He is obviously the hero of the piece, just by the lighting and coloring. While others in this short are seen in shadow and half light, Donald is always bright and colorful. 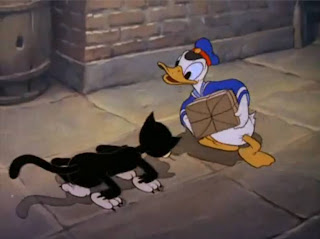 As Donald leaves the hideout of the crooks, we quickly see what is meant by the title of the short. It turns out that today is Friday the 13th, so Donald has to look out for all kinds of bad luck. He dodges driving under a ladder, winces once he breaks a mirror, and then gets tangled up with a black cat in his path. 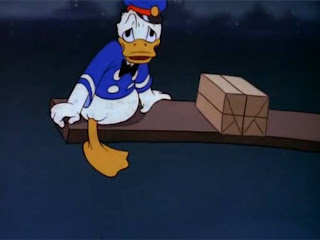 This is the part of the short that really shines, as you see Donald struggle with his own superstitions and the real threat of the black cat, all while juggling this bomb. There is humor balanced with adventure and atmosphere, in a way we really have not seen before in the Disney shorts. 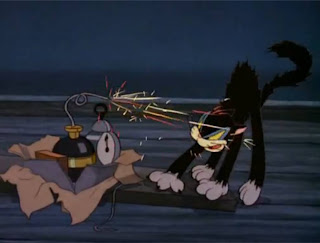 In the end, when the bomb does explode and Donald is okay, it turns out it really is his lucky day. There’s great comedy coming before that, and a fantastic bit where Donald gets buried in fish only to attract a herd of cats. This short was a very pleasant surprise, because of the way the animators used all the different tools at their disposal to make a different short than I was used to. Great work and a definite new direction for Disney.