1939 has to be known as the year of Donald Duck. The former sidekick to Mickey Mouse truly made his move to the biggest of the Disney stars in 1939, with the vast majority of the shorts made by the studio featuring Donald. The last of these is Officer Duck, which introduces Pete and Donald as adversaries.

We’ve seen Pete in shorts with Donald before, but never with the two of them matching wits. So it’s interesting to see this set up. Donald is a police officer, which lends itself immediately to great comedy. He is asked to go take in a crook, Tiny Tom, who turns out to be Pete. 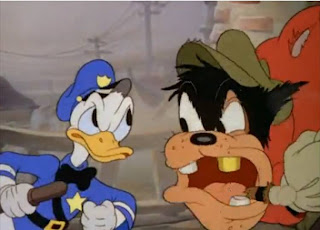 What’s interesting to me is seeing the conflict set up between the two, and what would eventually become the rivalry between Donald/Scrooge and the Beagle Boys. Pete is dressed in the same striped shirt that we would eventually know as the Beagle Boys’ costume in the Disney comics and Duck Tales TV show. It seems as though this is the first step towards that ultimate end. 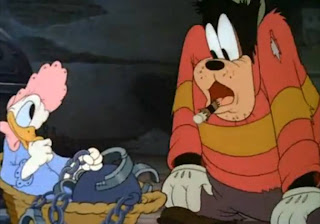 The short as a whole is a one note joke. Donald’s plan to take down Pete is to dress up like a baby and pretend that he was left on Pete’s doorstep. Once inside, the action involves Donald trying to slap the cuffs on and/or steal Pete’s gun. He tries a variety of tactics, with limited success. 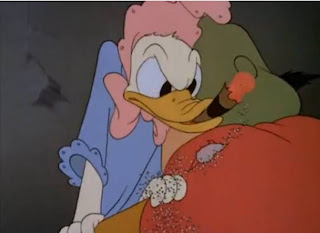 The fun of this one is seeing Donald try to keep his cool. Though Pete often frustrates his attempts, Donald doesn’t get frustrated and angry like he normally does in these shorts. Instead, Donald keeps at it, showing persistence with good acting. It’s fun to see that from him, because it’s not normal. 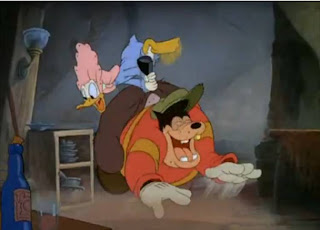 That said, the majority of the short doesn’t resonate for me. It’s the same thing over and over again, and while it’s not bad, it’s also not as funny as some of the other Donald stuff we have seen so far. Donald’s not at his best, because he can’t go crazy and get angry. It’s more what you would expect from Mickey, to be honest. 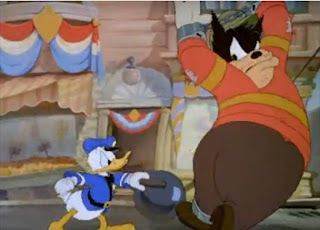 The ending seems a little contrived, as Donald finally gets the cuffs on Pete and then is chased outside, only to meet up with a parade of policemen. It’s a funny gag, but resolves the conflict a little too quickly and cleanly. But hey, it’s a cartoon, not a Scorsese movie.

That’s it for 1939, except for a pair of commercial shorts featuring Mickey Mouse. We’ll get to those next, then it’s on to Pinocchio!