It’s been a while since we have seen Mickey Mouse in the Disney shorts, but he returns in a big way with The Pointer, a short that sees a number of changes in our main mouse. This is a new Mickey, and it’s much closer to the Mickey we would see in cartoons today than what we might have seen in the past.

This is the first time Mickey’s design has been so close to what it is today. The main difference is the addition of pupils to Mickey’s eyes, but there is more too it. The pupils help make his face more expressive, which has been a focus of the tweaks to Mickey for a while now. There is also a great use of shading on Mickey in this short, adding much more dimension to the animation. 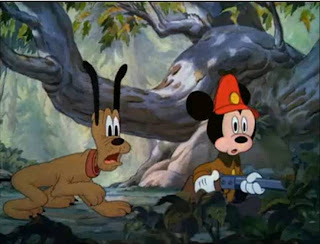 It’s also interesting that Mickey in this short is very much the celeb. When he is threatened by a bear, he even lets the bear know that he’s Mickey Mouse, and won’t hurt the bear. It’s a neat window into Walt, who is still providing the voice to Mickey. Rumor has it that Walt’s recording session was filmed, and his gestures were used in the scene of Mickey talking to the bear. Once can imagine Walt saying, “It’s me…Walt Disney!” to someone on the street here as well. 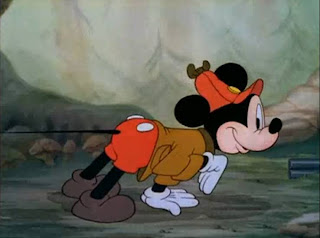 The artistry of this short cannot be overstated. Scenes of Mickey and Pluto walking through the woods are breathtaking. The detail of the backgrounds and the use of color to establish tone and mood are fantastic. It’s a great difference from something like Sea Scouts or The Beach Picnic, where the focus was more on Donald and his exploits. This is much closer to Snow White than a short. 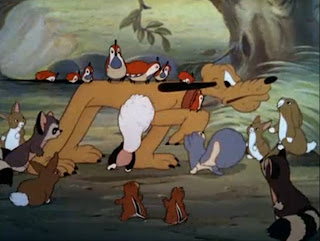 The plot has Mickey trying to teach Pluto to be a quail hunting dog, to no avail. Pluto isn’t cut out for the pointing business. In fact, when he does finally get to work, he gets separated from Mickey, and when he points at the quail, he doesn’t get anywhere. Mickey is off in another part of the forest, being trailed by a bear that he mistakes for Pluto. 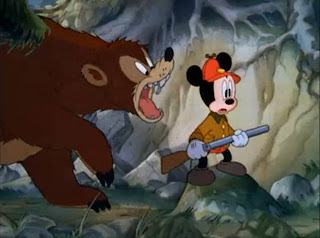 The cross cutting of this short between Mickey’s hunt with the bear and Pluto standing perfectly still with animals all around him is very funny. Each of these are funny gags, but both require a little extra to make them truly remarkable. The slow build of the two coming together into a final chase sequence with the bear is very well done. 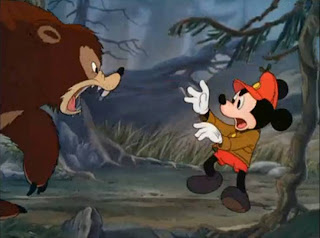 It does seem now that Mickey has not been the main star that his shorts are much more of an event. Originally, The Sorcerer’s Apprentice was supposed to be Mickey’s next short, but it was shelved and The Pointer came next. Regardless, this short shows a leap forward for Mickey, where his shorts are now events.