I mentioned in yesterday’s review that the last few shorts of 1938 are different than the typical Disney shorts. Today’s subject, Merbabies, is different because it is not a Disney short, at least not in one sense. It was released under the Disney banner, but it was not produced by Disney artists.

During the production of Snow White, Walt’s team was overwhelmed, but still had a contract to fulfill for more Silly Symphonies. So, Walt contracted out with his old Kansas City friends, Hugh Harman and Rudy Ising, to produce this short under the Disney banner. The Harman-Ising studio came up with Merbabies. The result? 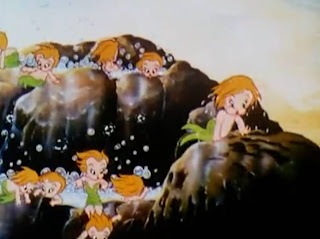 I’d have to say it’s mixed. There is no doubt that the art and animation in this short is superb. The colors, water effects and character design are all very well done. The problem is, there’s nothing in this that makes it all hang together. Nothing in this short grabs the viewer and makes them pay attention, or pulls them through. 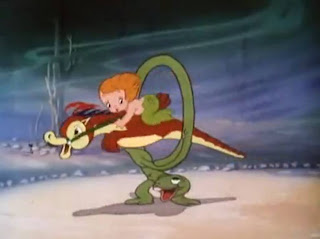 If you’ve been reading this blog for a while, you know my preference for story over simple gag shorts set to music. It would come as no surprise, then, to know that I did not like Merbabies. Perhaps it was knowing that it wasn’t a “Disney” film per se, but something just seemed off to me.

This is really a spiritual cousin to Water Babies, the earlier short in the Silly Symphonies, which featured cute little babies coming to life from out of a pond. I didn’t really like that one, either. The problem is that once you get the reveal of the cute little babies, there’s not much else to the short. 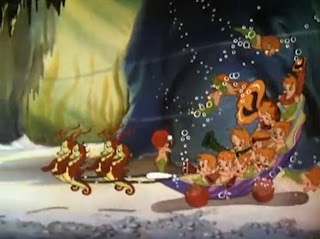 Sure, there are plenty of gags, and they’re not bad, but there’s nothing I thought was truly great. The middle of the short is basically a parade through the bottom of the ocean. To me, it recalled the old, old Disney shorts, like Alice’s Day at Sea, where we saw a parade just like this. In fact, many of the older Disney shorts featured side scrolling parades of gags just like this, and Harman and Ising worked on those shorts. 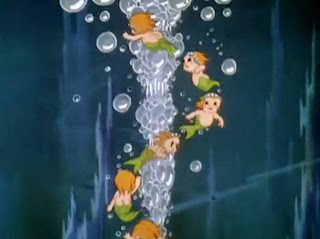 The main thing missing from Merbabies is not necessarily a story, though, as much as the lack of a main compelling character. There’s no one character that the viewer can latch onto. At the end, there is a small snail creature that acts like a dog and is somewhat interesting, but it’s just not enough. 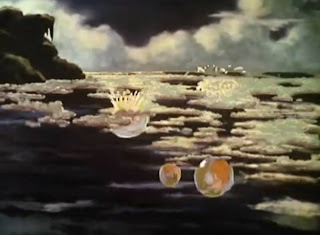 I know from reading about this short that many people love it, but I just didn’t get it. Merbabies looks great, but it doesn’t have enough for me to really recommend it highly. I tried to like it, I really did, but it just wasn’t able to hold my interest.